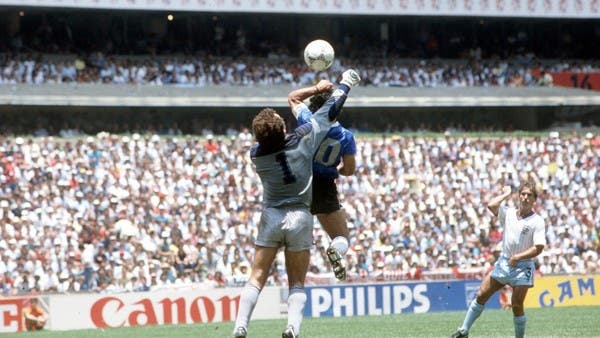 Argentina begged former England star Steve Hodge to withdraw Maradona’s shirt, which he wore in the Argentina-England match and scored the famous “Hand of God” goal, from an auction that sold for more than 5 million dollars and returned it to her.

And the 59-year-old English player now got Maradona’s shirt after the end of the match in the 1986 World Cup competitions, which was held in Mexico.

And the British newspaper “The Sun” reported that an Argentine delegation arrived in London in a last attempt to persuade the player to sell the shirt to them instead of offering it in an auction, as part of their plan to place it in a museum dedicated to the late legend in the capital, Buenos Aires.

The delegation consists of members of the Argentine Football Association and the Maradona family, as well as people from a private souvenir company. A member of the delegation said: Hodge is selling something belonging to Maradona and the Argentine Federation without a license, this shirt should be in Argentina for the people to see, not in a millionaire’s closet to show off.

There were conflicting rumors about the shirt, as his daughter revealed that the shirt presented was her father’s shirt in the first half and not the second half in which he scored the two England goals, while the show house confirms that Maradona himself confirmed that this shirt in which he scored the famous “Hand of God” goal, and after him he evaded 6 players before the ball is deposited in the net.

Dalma Maradona said in statements to “Radio Metro”: The English player thinks he got the second half shirt, but I want to make the truth clear, it’s the first half shirt, everyone who wants to buy it should know this.

And she continued: My mother does not own it, I know who owns it, but I will not reveal his identity. All I want to say is that this shirt is not the shirt with which my father scored his two famous goals against England during the 1986 World Cup.

Sotheby’s confirmed that what Dalma said were false statements, as the official spokeswoman for the house revealed: Before the shirt was presented, we did a lot of research to get confirmations about this shirt, and we made sure that it was the second half shirt.

And she continued: Maradona himself admitted in his book that he gave it to Steve Hodge, in addition to that we hired a “match expert” and he assured us that the shirt we have is Maradona’s shirt during his celebration of the two goals.