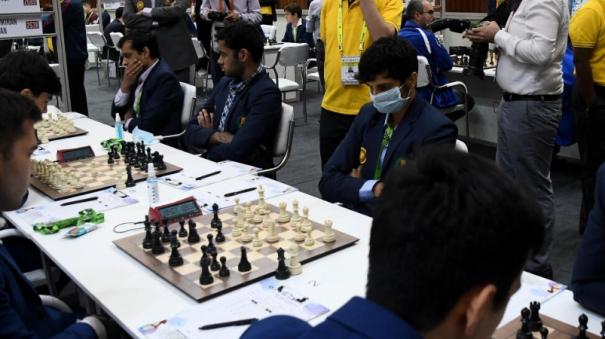 Chennai: At the end of 6 rounds, 3-time gold medalist Armenia is on top of the Chess Olympiad. Meanwhile, in the women’s category, India A team is leading with 12 points.

The 44th International Chess Olympiad is being held at the Four Points Sheraton Resort in Mamallapuram, near Chennai. Armenia defeated India B team by 2.5-1.5 in the 6th round held yesterday in the open division. India B team lost to Armenia by 2.5-1.5 points. This ended the Indian B team’s 5 consecutive wins.

D. Gukesh defeated Sarkisian Gabriel. The match between Sarin Nikal and Melkumian Hrant was a draw. Athiban and Ter-Sahakyan lost to Samuel and Sadwani Raunak and Hovhannisian Robert.

Armenia tops the table with 12 points after defeating Indian B team. The team has won all 6 rounds played so far. Meanwhile, the Indian B team is at the 3rd position with 5 matches won.

In the Open division, the United States is considered one of the most likely teams to win the championship, next to Armenia. The team defeated Iran 2.5-1.5 in their 6th round and is in 2nd place with 11 points. Uzbekistan, France, India A, Netherlands, Cuba, India C, Germany, Kazakhstan, Serbia, Peru and all 10 teams are in the 4th to 12th places with 10 points. Although all these teams have got the same points, the teams are ranked based on the number of matches played by each player.

England, Spain, Israel, Greece, Ukraine, Azerbaijan, Iran, Australia, Austria, Hungary, Philippines and Brazil have 12 teams with 9 points each. With 5 more rounds to go, it could be a tough race for a medal.