Arsenal boost their chances in the Champions League with Leeds points 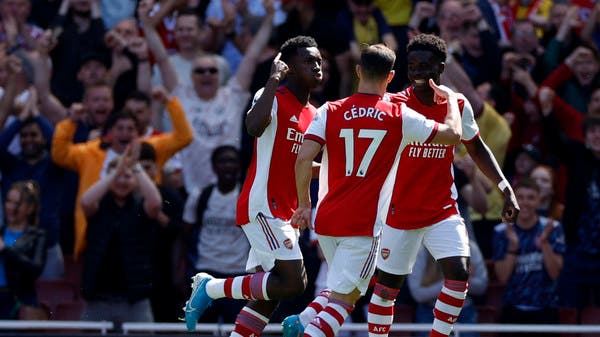 Arsenal consolidated its position in fourth place and its chances of snatching one of the last two cards that qualified for the Champions League next season, by beating its guest Leeds 2-1 on Sunday in the thirty-sixth stage of the English Premier League.

Arsenal advanced with two early goals, scored by promising striker Eddie Nketiah in the fifth and tenth minutes, but he failed to strengthen despite the numerical shortage in the ranks of his guests after his defender Luke Ailing was sent off in the 27th minute.

The visitors managed to reduce the difference in the 66th minute through Spanish defender Diego Llorente, and pressed hard in search of an equalizer, but to no avail.

This win is the fourth successive victory for Arsenal after three consecutive defeats, and the 21st this season, raising his score to 66 points in the last fourth qualifying place for the prestigious continental competition, one point behind his third neighbor Chelsea.

Arsenal also expanded the difference to four points between it and its other neighbor, the fifth Tottenham, who is competing for the prestigious continental card, which had snatched a valuable draw from its host Liverpool 1-1 Saturday at the opening stage.

On the other hand, Leeds United suffered its second loss in a row and the seventeenth this season, as it fell to the eighteenth place leading to the first division.

Everton took advantage of the loss of Leeds United and got out of the relegation zone by beating its host Leicester City 2-1.

Everton was the first to score through Ukrainian Vitaly Mykolenko in the sixth minute, and Leicester City responded after five minutes through Zambian Baltsun Dhaka (11), before giving defender Mason Holgate the victory for the visitors in the 30th minute.

It was Everton’s second successive victory and the tenth this season, raising his score to 35 points and ascending to the sixteenth place, one point ahead of Burnley and Leeds, knowing that he played a game less than them, which he will play on Wednesday against his host Watford, the second relegation to the Chambonship with Norwich City, who is in the last place.

West Ham United boosted its chances of winning the Converse League and possibly the Europa League by beating its host Norwich City with a clean four, including a double for Algerian international Said Benrahma (12, 45 +3).