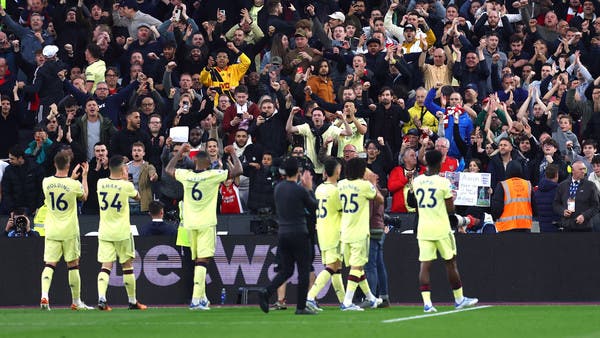 Arsenal maintained their fourth place in the Premier League with a 2-1 away win against West Ham United thanks to a header from Brazilian defender Gabriel at the London Stadium on Sunday.

Arsenal temporarily fell to fifth place after Tottenham Hotspur won earlier today, before regaining its qualifying position for the Champions League next season.

Arsenal scored its third win in a row, bringing it to 63 points from 34 games, two points behind Tottenham, with four rounds remaining.

West Ham United, seventh in the standings, has moved away from the semi-final conflict, with 52 points and only three matches, and its focus will be on facing Eintracht Frankfurt in the second leg of the European League final.

After a cautious start, Arsenal had more possession of the ball and advanced with a header by defender Rob Holding after a corner kick by Bukayo Saka in the 38th minute.

Defender Gabriel scored the winning goal at a level summit in London.