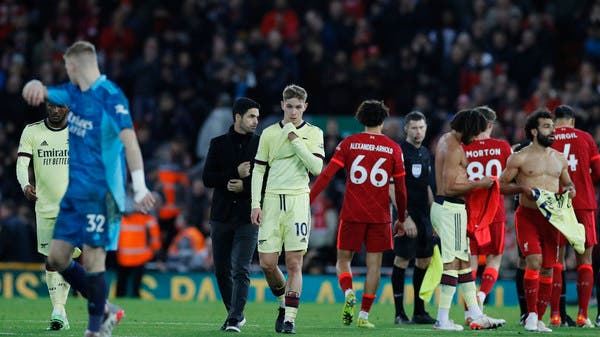 Arsenal coach Mikel Arteta stressed that his team should take advantage of the 4-0 defeat against Liverpool in the English Premier League on Saturday and not repeat the mistakes he made at Anfield, while preparing for a large number of matches during the remainder of this year, as he will play Nine matches in all competitions until the end of this year.

A verbal altercation between Arteta and his German counterpart Jurgen Klopp in the first half sparked the enthusiasm of the Liverpool fans and players, who rained four goals on the guests after that.

The loss ended an eight-match unbeaten run for Arsenal, who had not won a league match at Anfield since 2011, when Arteta was a player in their ranks.

After the defeat, Arteta said that playing at Anfield is always very difficult and that Liverpool deservedly won, and the Spanish coach added: “I don’t like learning in this way, but there are a lot of lessons we can learn from this game for sure.”

He continued: We will reconsider where we were supposed to be better, and we will also reconsider why we lost in this way, and then we will direct our energies and focus towards the next match.

Arsenal is fifth in the English Premier League with 20 points from 12 matches, and will meet its guest Newcastle United next Saturday.