As religious conflicts have increased in Karnataka, Hindus and Muslims celebrate Ganesha Chaturthi 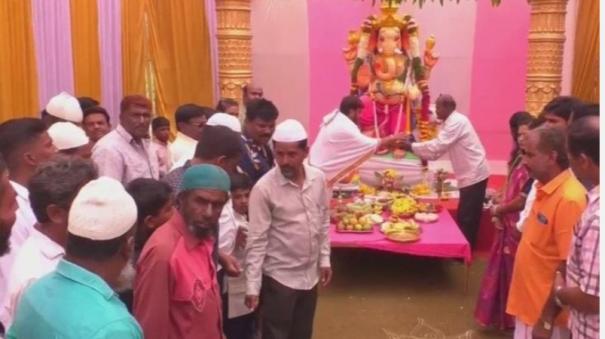 Bangalore: The incident of Ganesha Chaturthi being celebrated by Hindus, Muslims and Christians together with the rise of religious conflicts in Karnataka has created a sensation.

In recent times, due to the increase in religious conflicts in Karnataka, public peace has been disturbed in many places. In places like Kodagu, Shimoga, Udupi and other places, there has been a tense situation as Savarkar’s picture has been placed in the Vinayagar Chaturthi pandal.

In this case, Muslims and Christians are celebrating Ganesha Chaturthi festival together with Hindu people in Rajiv Nagar near NR Pura in Chikkamagaluru district. More than 500 people participated in this function, which was held to demonstrate social harmony.

Zubetha, president of Vinayaka Seva Sangh, said: I belong to the Muslim religion. I have been the President of RN Pura City Panchayat for the last 13 years. Since there are people of all religions here for a long time, we celebrate all religious festivals on behalf of the city panchayat.

I have been the President of Vinayaka Seva Sangh for the last 13 years. There are 3 Muslim members and 2 Christian members in the 20-member committee headed by me. We have decided to celebrate Vinayagar Chaturthi festival for 3 days on behalf of our city. For this we collected funds from families of all religions and made arrangements for the event.

On Wednesday, the idol of Lord Ganesha was installed and worship was performed. On Friday we will be taken in a procession and immersed in the RN Pura lake. People of all religions participated in this event and worshiped Lord Ganesha. Through this we want to share the message that we can live with social harmony not only in our city but also across the country. He said this

Similarly in Mandya district also Hindus and Muslims celebrated Ganesha Chaturthi with harmony. More than 100 Muslim people participated in this 18th annual Ganesha Chaturthi festival for social harmony. In this 10-day festival, the last 3 days will be worshiped by Muslim families to Lord Ganesha.

The video of this social harmony Vinayagar Chaturthi festival held in Chikkamagaluru and Mandya districts has been released on social media and has received great response.