As the G7 leaders flock to the Bavaria summit… Biden: Putin’s bet on NATO’s disintegration is an “illusion” 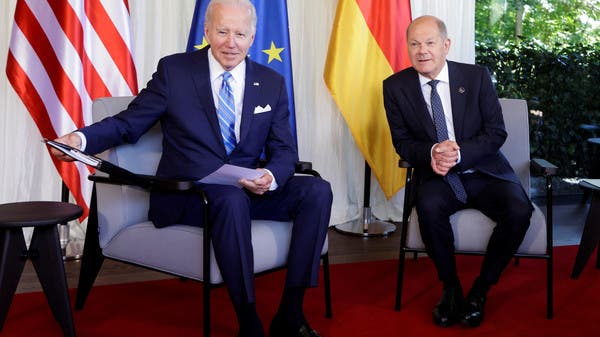 US President Joe Biden said his Russian counterpart, Vladimir Putin, hoped the West would be “divided” as Russia’s invasion of Ukraine continued. But Biden praised allies who stood united in the Kremlin during the four months of the war, imposing sanctions on Russia while sending weapons to Ukraine.

Welcoming German Chancellor Olaf Scholz on Sunday, Biden praised his counterpart for helping maintain pressure on Russia, a message central to Biden’s five-day visit to meet allies at summits in Germany and Spain.

As Biden said, “We have to stay together, because Putin was counting from the start that NATO and the G7 would somehow split up… but we didn’t and we won’t.” “We cannot let this aggression take the form it takes and get away with it,” Biden added.

Schulz, who hosts the annual G7 summit in the Bavarian Alps, greeted Biden on a balcony overlooking what the US leader described as a “fantastic” view of lush green and towering peaks. Biden credited Schulz for helping lead the Europeans against Russia, saying his tough response “has had a huge impact on the rest of Europe to act.”

On Sunday in Germany, Biden considered the recent Russian strikes on a neighborhood in Kyiv close to an arms factory that had previously been targeted in recent weeks, as “barbaric.” “It’s also their barbarism,” he said, referring to the Russians.

Schulz has come under fire at home for allegations of hesitation about what kind of weapons Europe’s richest country should send to Kyiv in its fight against Russian forces in eastern Ukraine. “It’s a strong message that we have all managed to stay united, which Putin never expected,” Schulz said.

In this context, Ukrainian Foreign Minister Dmytro Kuleba called on the leaders of the Group of Seven major countries to take immediate decisions to impose more sanctions on Russia. He also called on the countries of the group to speed up the delivery of heavy weapons to the Ukrainian army.

British Prime Minister Boris Johnson on Sunday warned French President Emmanuel Macron against “any attempt” to reach a “negotiated solution” now in Ukraine that would prolong “global instability”, according to what the British government announced.

The government spokesman said that the two leaders agreed, during a meeting on the sidelines of the Group of Seven summit in Germany, that the current time is “a sensitive moment in the development of the conflict and that it is possible to reverse the course of the war.”