Ashraf Ghani blames US for Taliban takeover on Afghanistan 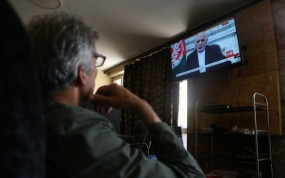 Digital Desk, Kabul. Former Afghanistan President Ashraf Ghani, breaking his silence nearly a year after his government fell, has blamed the US, Kabul politicians and others for the Taliban’s capture of the war-torn country in an interview.

In his first television interview with the newly established media outlet Afghan Broadcasting Network (ABN) on Wednesday, Ghani notably spoke with Zalmay Khalilzad, the former US ambassador to Afghan peace, as well as several prominent Afghan nationals, DPA news agency reports. Blame the politicians for this.

Ghani appeared most angry at Khalilzad, who signed a peace deal with the Taliban in Doha that paved the way for a complete withdrawal of foreign forces from the country. He called Khalilzad corrupt and incompetent. The former president fled Kabul after the Taliban entered the Afghan capital on August 15, 2021 and is now living in exile in the United Arab Emirates. His departure paved the way for the Taliban to capture Rashtrapati Bhavan.

Ghani later apologized to Afghan civilians, saying they had to flee to avoid bloodshed. He was heavily criticized nationally and internationally for fleeing before a political settlement was reached. However, he still considers himself the President of Afghanistan. Before his government fell, Ghani claimed that he would stand against the Taliban until death. He now says he had no executive power when Kabul fell. Ghani told ABN that he would leave. He was the last person to do so to avoid repeating Dr. Najeeb’s bitter experience.

He was referring to Mohammad Najibullah, the former president of Afghanistan, who was killed by the Taliban in 1996 when they first captured Kabul. He said the country’s former defense minister fled in front of him and the US embassy in Kabul had already begun evacuating its staff and Afghan elite forces. Ghani told ABN that his intelligence chief had said that Afghan forces were unable to fight at the time.