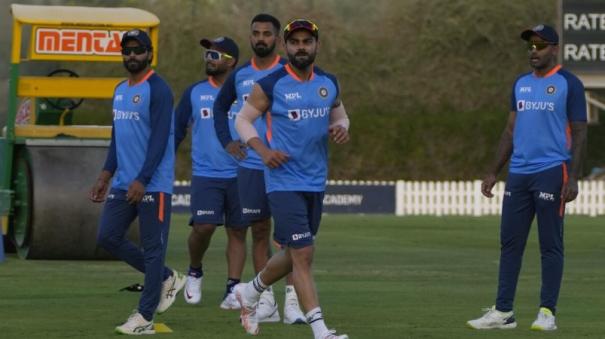 In the past, the Indian team followed the style of keeping wickets at the start and scoring runs in the final stages. This is considered as ‘Tharaka Mantra’ for continuous success. But all this has started to change as India failed to qualify for the knockout round of the 2021 T20 World Cup.

The idea of ​​giving the opposition a chance at the very beginning started to arise and the Indian team ingrained the idea of ​​adopting an aggressive approach from the very first ball. Recently, Indian team captain Rohit Sharma said, “After last year’s T20 World Cup series, we realized that we needed a change in our game approach. We gave clear information to the players about this.

They were ready to accept the challenge. If clear information is available from the captain and coach, the players will individually try and get the job done to move towards where the team is trying to go. For that, they need freedom and clarity, which we are trying to provide.”

With the new approach, India’s run rate in the powerplay has steadily improved. The run rate increased from 7.87 in 2021 to 8.67 this year. In this way, the Indian team will undergo self-examination in the Asia Cup. It will be a preview for the T20 World Cup. India begin their Asia Cup campaign against Pakistan.

The Indian team has played more T21 and T20 matches this year than any other team. In this, various experimental attempts were made in batting and bowling. But really the Asia Cup series will be the best platform to select the team for the World Cup series.

Rohit Sharma, Rishabh Pant, Suryakumar Yadav, Dinesh Karthik and Hardik Pandya are the ones who can add more strength to the team which is full of players who can give victory. Arshdeep Singh may fill the gap in Jasprit Bumrah’s absence. Because Arshdeep Singh has emerged as the most economical run scorer after Bumrah in T20 matches. 23-year-old Arshdeep Singh has the ability to perform brilliantly in the final overs despite not playing much in the Indian outfit. Yuvendra Chahal may try to make an impact in spin.

Virat Kohli has been out of form lately. He has returned to the team after about a month’s rest. Virat Kohli has played only 4 T20Is since the World Cup in November last year. He scored 81 runs at an average of 20.

The IPL is not going well for Virat Kohli. He scored 341 runs at an average of 22.73 in the 2022 season. However, now the team management is confident that Virat Kohli, refreshed by a well-timed rest, will regain his lost form.

Similarly, the form of KL Rahul, who has recovered from injury, is not good. Apart from this, in this year alone, the Indian team has tested 7 men as opening batsmen. If KL Rahul is unable to play due to this, then Rishabh Pant or Surya Kumar Yadav may take the place.

Slower surfaces, larger boundaries, and heat are expected to cause teams to post neutral scores. However, whichever team adapts to the situation better and takes the game deeper and secures victory, that team will become the champion of the Asian continent.