Asia Cup | Afghanistan advanced to the next round with 2nd win 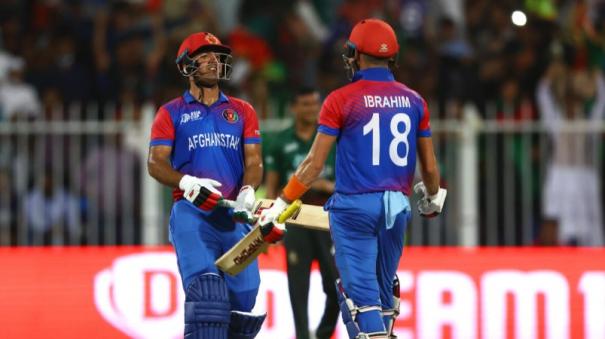 George: Afghanistan team has advanced to the next round after winning the 2nd match of the Asia Cup T20 cricket series.

Today’s match in Georgia saw the clash between Bangladesh and Afghanistan. Mohammad Nabi-led Afghanistan beat former champions Sri Lanka by 8 wickets in the first match. In that spirit today faced Bangladesh. Bangladesh won the toss and elected to bat first. Afghanistan’s Rashid Khan and Mujeeb each fell to control the Bangladesh frontline. As a result, they stumbled by losing 6 wickets before scoring 89 runs.

All-rounder Mozadek Hossain added 48 runs in the last over, and Bangladesh scored 127 runs for the loss of 7 wickets at the end of 20 overs. On the Afghan side, Rashid and Mujeeb took 3 wickets each.

Chasing a simple target, Hazratullah Jazai and Rahmanullah Gurbaz got off to a slow start but quickly lost the wicket. The first 3 wickets of the Afghan team were lost in the space of four overs. However, Ibrahim Zadran and Najibullah Zadran combined to lead the team to victory. Especially Najibullah ended the match early by hitting sixes.

Afghanistan scored 131 runs in 18.3 overs with Najibullah hitting 43 runs off 17 balls and Ibrahim hitting 42 runs off 41 balls with 6 sixes and a four. With this, the 2nd team has won and progressed to the Super 4 round.