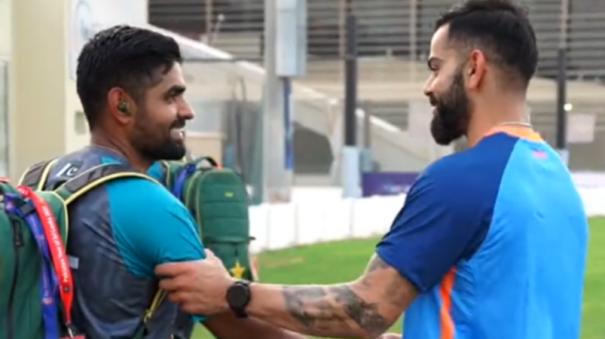 Dubai: Former Indian captain Virat Kohli has met Pakistan cricket team captain Babar Azam. When both of them met each other they shook hands and said ‘Hello; After saying that, they talked for a few seconds.

The Asia Cup series will be held in the UAE from the day after tomorrow till September 11. The Indian team is led by Rohit Sharma in this series. All the teams have landed in the Emirates to participate in the series. This includes the Pakistan team.

In this series, both the teams will play the match to be held on 28th. This is the first match for both the teams. So this match has created a lot of expectation among the fans. The last time India and Pakistan played in the T20 World Cup League, the Indian team lost. That is the reason for this expectation.

In this case, the Indian Cricket Board has shared a video of the meeting between Pakistan captain Babar Azam and Indian player Virat Kohli.

Both are top scorers in international cricket across all formats. It is noteworthy that Babur has scored 10,472 runs and Kohli has scored 23,726 runs.

Hugs, smiles and warm-ups as we begin prep for #AsiaCup2022 #AsiaCup | #TeamIndia pic.twitter.com/bVo2TWa1sz