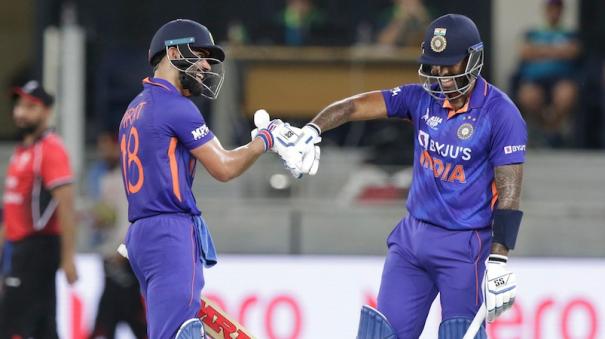 Dubai: Virat Kohli returned to his old form with a half-century in today’s match of the Asia Cup cricket series. Suryakumar Yadav also showed action with him.

The Indian team, which is in Group A of the ongoing Asia Cup cricket series in the United Arab Emirates, defeated Pakistan by 5 wickets in their first league match. In this case, the Indian team is clashing with Hong Kong today in its 2nd match.

The Hong Kong team won the toss and chose to bowl first. Accordingly, Rohit Sharma and KL Rahul started the Indian team. Rohit Sharma, who bowled aggressively at the start, departed at the same pace. KL Rahul, who partnered with Kohli next to him, played a calm game but did not reach a big score. Virat Kohli and Suryakumar Yadav captured the game while Rohit was dismissed for 21 runs and KL Rahul for 36 runs.

Together, they chased away the bowling of the Hong Kong bowlers from all four corners. In that way, Virat Kohli, who has not returned to form for a long time and faced criticism, now again showed action by scoring a half-century. Similarly, Surya Kumar Yadav, who scored the fastest half-century, hit a hat-trick of sixes in the last over.

Subsequently, at the end of the stipulated 20 overs, the Indian team lost 2 wickets and accumulated 192 runs. Suryakumar Yadav scored 68 runs off 26 balls and Virat Kohli scored 59 runs off 44 balls.