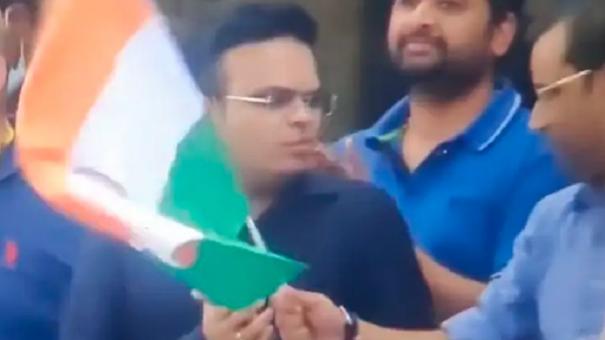 Dubai: A video of BCCI president Jai Shah disapproving of holding the national flag in the Asia Cup cricket victory parade is being viral on the internet by the opposition.

Chasing that target, the Indian team won by scoring 148 runs for the loss of 5 wickets in 19.4 overs. Players like Kohli, Jadeja, Hardik, Bhuvneshwar Kumar, Arshdeep Singh played an important role in this victory.

In this case, the video of BCCI president Jai Shah, who held the national flag in his hand during the Asia Cup cricket victory match, is being viral on the internet by the opposition parties.

A Telangana Rashtriya Samithi leader shared the video on his Twitter page and said, “If this was a non-BJP person who had refused to hoist the Indian flag, the BJP technical wing would have swung into action and called the person anti-national. The pro-Modi media would have held debates all day. Fortunately, it happened to be Jai Shah, son of Shashinsha.” He posted in a sarcastic tone.

If it was any non bjp leader who refused to hold the Indian Flag, the whole of BJP IT Wing would have called Anti National and the Godi Media would have day long debates on it….
Luckily its Shahenshah’s Son Jay Shah pic.twitter.com/zPZStr2I3D

The Maharashtra Congress Party, which shared the same video, also questioned why the son of the Home Minister refused to hoist the national flag.