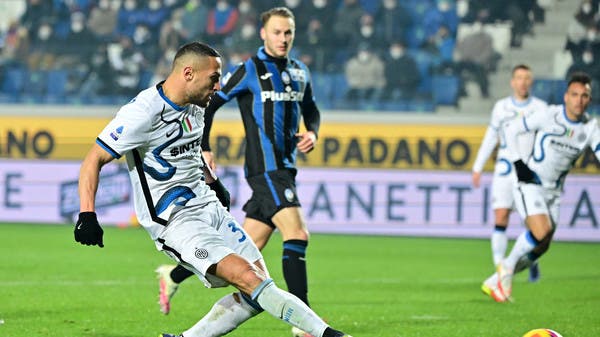 Atalanta hindered the uprising of its guest, Inter, in the Italian Football League, after a 0-0 draw with him on Sunday, in the 22nd stage of the competition.

The rest of the matches of the stage that took place today resulted in Roma defeating Cagliari 1-0 and Verona at Sassuolo 4-2, and Venezia tied with its guest Empoli 1-1.

Despite the draw, Inter (the title holders), who won their last eight matches in the competition, remained at the top of the championship standings with 50 points, two points ahead of their closest rivals, their arch-rival Milan, while Atalanta raised their score to 42 points in fourth place.

Roma ended its series of poor results in its last matches in the championship, after beating its guest Cagliari 1-0 on Sunday, in the twenty-second stage of the competition.

Roma, who scored one point from their last three matches in the tournament, rose to 35 points in sixth place, while Cagliari’s balance froze at 16 points in eighteenth place (third from the bottom).

Sergio Oliveira took the championship role in the match, after scoring Roma’s only goal in the 33rd minute from a penalty kick, to restore the capital’s team some calm, after the violent criticism of his players in the recent period.

Verona snatched a thrilling victory at its host Sassuolo 4-2 earlier today. The first half ended with Verona advancing with two goals, signed by Gianluca Capari and Antonin Barak, in the 37th and 44th minutes. In the second half, Gianluca Scamaca responded with a goal for Sassuolo in the 54th minute, but only three minutes later Barak scored his second goal and the third for Verona from a penalty kick.

Gregory Devril scored the second goal for Sassuolo in the 67th minute, but Barak won the hat-trick title by scoring his third and fourth goal for Verona in the fourth minute of overtime.

The win raised Verona’s tally to 30 points, in tenth place, two points ahead of Sassuolo, who fell to twelfth place.

The 1-1 positive tie imposed itself on the Venezia meeting with its guest Empoli. Venezia remained in 17th place (4th from the bottom) with 18 points, while Empoli raised its score to 29 points in 11th place.

Poland’s Simon Zurkowski scored for Empoli in the 26th minute, before David Okereke equalized for Venezia in the 74th minute.