Athletes: Too many changes are detrimental to the national team.. We support the continuation of Arruabarina 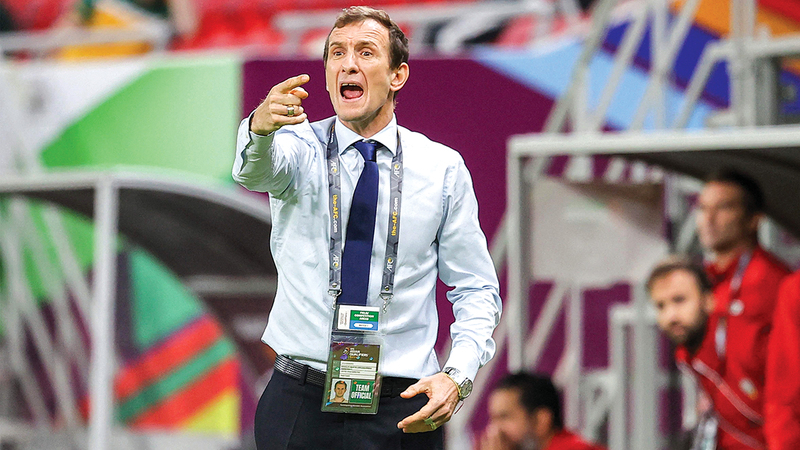 Athletes stressed the importance of the continuation of the coach of the first national football team, Argentine Rodolfo Aruabarina, in the leadership of «Al-Abyad», during the next stage, which is witnessing important benefits, most notably participating in the 2023 Asian Cup, despite the team wasting the opportunity to reach the 2022 World Cup, after losing The last match against Australia in the Asian play-off qualifier for the World Cup under the leadership of Aruabarina, noting that the technical stability process for the team achieved many technical goals, including giving the coach the opportunity to get to know more about the players, and implement his program as required, and that the coach’s continuation makes him feel a kind of stability And reassurance, which is reflected positively on the team and the team’s players, knowing that Arruabarina, who took over the coaching team last February, succeeding Dutchman Marvik, has led the team so far in three official matches against Iraq, South Korea and Australia, winning in one match and losing in two matches, in When he led him in a friendly match and one against Gambia.

They told Al-Emarat Al-Youm: “The frequent replacement of technical devices greatly harms the team and its stability process, and we have witnessed during the period that about five coaches trained the team within a short period, but on the other hand, it is important that the Football Association conduct a comprehensive technical evaluation of the performance of the team.” The technical staff of the team is transparent.

The contract of the coach of the national team, Arruabarina, runs until the end of the 2023 Asian Cup.

A member of the Board of Directors of Dibba Al-Fujairah Club, director of the first team, Juma Al-Abdouli, confirmed that he supports the continuation of the Argentine coach, Aruabarina, in training the team and giving him the full opportunity, especially as the team is about to participate in important events, including the Arab Cup, the Gulf Cup 25 and the Asian Cup 2023, considering that it is necessary to That the team witness a period of stability at the level of the technical staff, and that the coach follows the matches of the UAE league and the players of the team.

Al-Abdouli added: “I hope that there will be stability in the team so that we know its squad before entering any match on the field, because we missed this thing in previous periods, so stability on the coach is very useful.”

He continued, “The technical instability makes the coach of the team live in a state of anxiety because he does not feel stability, and this affects even the players of the team, because any new coach who comes to the team has a different policy than the other, and this matter harms the team and the players.”

Al-Abdouli stressed that he is against the replacement and substitution process in the team during the last period, but in return he supports the use of prominent elements in the Olympic team to join the first team.

For his part, the former director of the Al-Nasr football team, Khaled Obaid, said that Aruabarina’s continued leadership of the team during the coming period is a positive step, given his knowledge of the team and Gulf and Emirati football, noting that the program developed by the coach was good.

Obaid added: “The team is currently in a stage of change at the level of some centers, due to the presence of young players, so technical and administrative stability is very important for the team in the next stage, in order to achieve the desired goal.”

He described Abeid Aruabarina as a coach no less than the international coaches, so he supports his continuity in coaching the national team.

He added, “Arruabarina is a coach we knew well, and he in turn knew the team, through his work in the past period, and the team is currently in a period of hiatus, so it is difficult to find a new coach to lead the team.”

In turn, the former international player Hussein Ghuloom stressed that with stability in the team, but provided that this stability is positive and achieves the team’s desired goals, pointing out that half of the current team’s players are over 30 years old, so the team needs a replacement and replacement process in the period coming. Gloom indicated that everyone praised the team’s performance during the Australia match, although the team needed to win, not perform, to enhance its chances of qualifying for the World Cup.

Ghuloom asked: “Is the National Teams Committee in the Football Association convinced of coach Arruabarina?”