Athletes: With the passing of Khalifa bin Zayed, we lost a loving father and leader 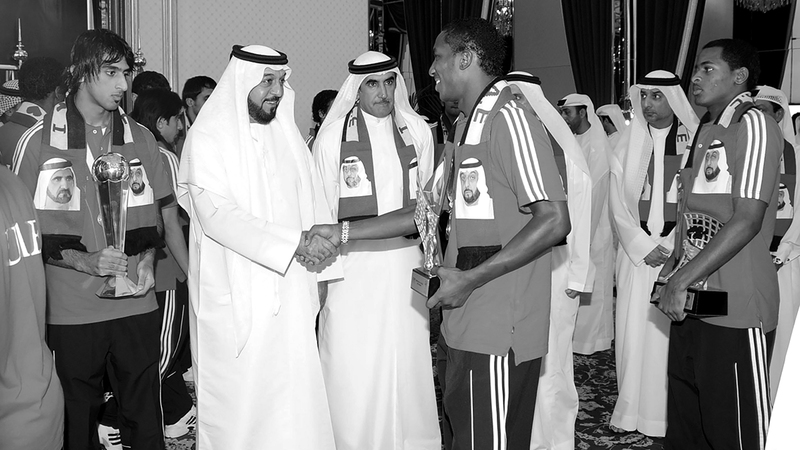 Athletes expressed their deep sadness at the death of His Highness Sheikh Khalifa bin Zayed Al Nahyan, President of the State and Leader of the Nation, reviewing the long march of the late great man in harnessing all possibilities to advance UAE sport in various fields, whether through the establishment of the latest stadiums and sports facilities, and the provision of infrastructure Modern infrastructure, or the provision of direct support for all sports at the level of bodies, federations, clubs and sports sectors in the country, noting that the UAE sport has lost a loving father and a wise leader with his passing, pointing out that his white hands, and his unlimited support for sports and his athletes in the country, has made a great transformation and a major contribution In the development of Emirati sports, and its achievements and championships in various fields and occasions, we ask God Almighty to bless the late great leader of the nation with the vastness of his mercy, and to make what he gave to his country and his children in various fields, and to all humanity, in the balance of his good deeds.

They told “Emirates Today”: “We console ourselves, the wise leadership in the country, the people of the UAE, the Arab and Islamic nations, and the whole world on the passing of His Highness Sheikh Khalifa bin Zayed Al Nahyan, the leader of the nation and the patron of his march.”

The former head of the General Sports Authority and former president of the Emirates Football Association, Youssef Al-Sarkal, said that the late, God willing, His Highness Sheikh Khalifa bin Zayed Al Nahyan, was one of the biggest supporters of the sport of the UAE, indicating that he was keen to see the state flag always raised. In the international, regional and Arab sports forums, and at the local level, he was completely supportive of the state’s clubs, he did not differentiate between all clubs, and he supported everyone, and in his life he set development programs for UAE sports, and advanced facilities.

Al Serkal added, “At the level of the Emirates Football Association, the late His Highness Sheikh Khalifa bin Zayed Al Nahyan was one of the biggest supporters of the federation, and I remember that in one of the situations he advised me directly to put the state’s interest above the personal interests of the clubs, because the state’s representation at the external level More important than the local competition.”

Al-Sarkal added, “Thanks to the support of the late great, many sporting achievements for the UAE in various fields have been achieved.”

Abdul-Malik: The biggest supporter of the sports sector

The former Secretary-General of the General Sports Authority, Ibrahim Abdul-Malik, confirmed that they had lost, with the departure of His Highness Sheikh Khalifa bin Zayed Al Nahyan, a father and a compassionate leader for his people and for all humanity.

Ibrahim Abdul-Malik said, “Our condolences to ourselves, our wise leadership, the people of the UAE, the Arab and Islamic worlds, and the whole world, for the loss of the father and the compassionate leader Sheikh Khalifa bin Zayed, the pioneer of completing the path of the late Sheikh Zayed bin Sultan Al Nahyan, and the patron of empowerment in the UAE.”

Abdul Malik pointed out that the late great was one of the biggest supporters of the sports sector in the UAE, noting that he does not forget his unlimited support and white hands for his sons, athletes and the youth of the Emirates in all sports fields, and his reception to them on all international, Arab and regional occasions, noting that the late Sheikh Khalifa Bin Zayed was harnessing all possibilities for the development of UAE sport, and to achieve achievements in various fields.

Ibrahim Abdul Malik added, “The support of the late Sheikh Khalifa bin Zayed to all athletes in the UAE was very great in all fields, and we are unable to show the whole world the extent of his great and unlimited support for the sports sector and for athletes, and no matter what we talk about, we will be remiss in his right, and I ask God Almighty to make His grave is one of the gardens of Paradise.”

For his part, the President of the Emirates Chess Federation, Dr. Sarhan Al-Muaini, confirmed that they have lost, with the departure of His Highness Sheikh Khalifa bin Zayed Al Nahyan, a loving and wise father and leader, indicating that they console themselves, the rational leadership in the state, and all the people of the Emirates, stressing that the late His Highness His Highness Sheikh Khalifa bin Zayed Al Nahyan, his hands were white, and supportive of all his athletes, pointing out that the great and unlimited interest and support for sports and athletes in various fields had a great role in all the achievements and championships that were achieved for the UAE sport on various occasions and participations, whether local or regional, continental or international.

Al-Maaini added, “Sorrow overwhelms everyone with the departure of the late Sheikh Khalifa bin Zayed Al Nahyan, may God have mercy on him, but we only say what pleases God, and I ask God to bless the great late with his mercy, and to dwell in his vast gardens.”

• “Our condolences to ourselves, our wise leadership, the people of the UAE, the Arab and Islamic worlds, and the world at large.”

• “In one of the situations, he directly advised me to put the interest of the state ahead of the personal interests of the clubs.”

• “He had a great role in all the achievements and championships that have been achieved for UAE sport on various occasions and participations.”