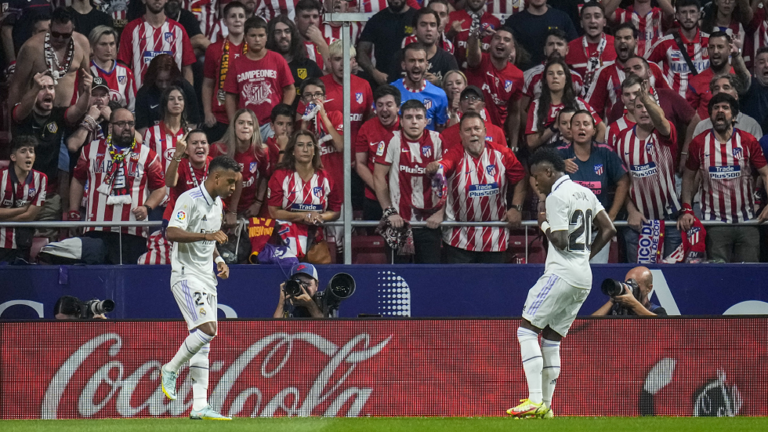 Atletico Madrid’s Brazilian striker Matthews Cunha sparked the anger of his team’s fans after he appeared dancing with his compatriot and Real Madrid star Vinicius Junior before the match between their two teams yesterday, Sunday, in the Spanish League.

Atlético fans demanded that Konya be excluded from the team, for provoking his colleague and Atletico Madrid captain, Koke, who had warned Vinicius against celebrating by dancing at the “Wanda Metropolitano” stadium if he scored against Atletico.

Konya responded to the criticism of the Atletico Madrid fans and said on his Twitter account: “Vinicius’ post was never directed at Koke, but at the racist who spoke through the microphone on a TV show,” and who described Vinicius as a “monkey” because of his goal celebration by dancing.

He added: “Anyone who has seen the interview conducted by Koke will know that what our captain said is true, everyone can do whatever they like when they score, but any fans of a rival team will not like watching someone dance in their stadium.”

He continued, “What I really wanted was to score, help my teammates, and dance to make my fans happy.”

And the Atletico player continued: “Let’s not look for problems out of place. I am grateful for all the affection I received and I will do everything in my power to increase it. I am not a person who is used to talking on social media, but it transcends barriers, you have a family in the end. We work and strive. Everything we have on the field.”