“Attack, insult and theft” during the celebrations of Schalke fans to return to the German League 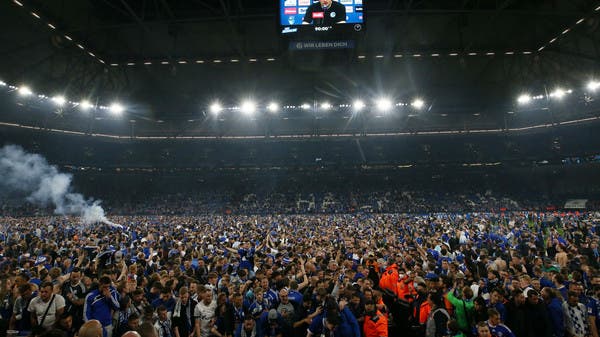 Several fans of Schalke 04 were injured when about two thousand fans took to the field to celebrate the team’s re-ascension to the German Football League (Bundesliga).

Some people were taken to hospital after the match that ended with Schalke 04 winning St. Pauli 3-2 on Saturday in the penultimate 33rd stage of the second division.

Schalke came from two goals behind during yesterday’s match to win the second division title and decide its rise again to the Bundesliga, where it has a five-point lead over its closest rivals Hamburg, Darmstadt and Werder Bremen, with one stage remaining in the competition, knowing that Werder Bremen has a game in hand.

Police in Gelsenkirchen also said in a statement issued on Sunday that 144 cases of fireworks shooting were recorded before and during the match.

A police officer was injured during a fight with a Schalke fan, and 20 criminal charges, including assault, insult and theft, were recorded on the sidelines of the match.

The “Veltines Arena” witnessed a crowd with a full capacity of the stands, as 61,271 fans attended the match.