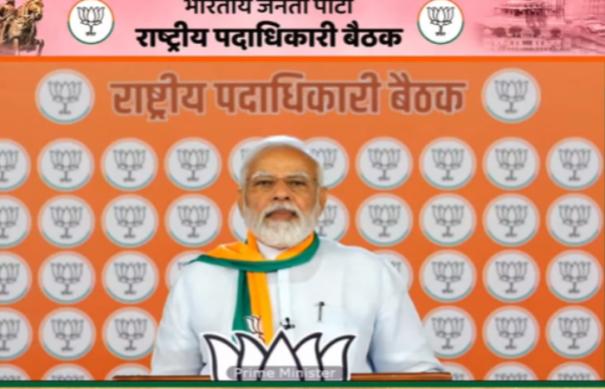 Jaipur: “Every language in India is our identity. Over the last few days, we have been seeing attempts to stir up controversy over language,” Modi said.

Modi speaking via video conferencing at a BJP executive meeting in Rajasthan:
Many in the country did not know about us when the BJP was Jana Sangh before. Our volunteers adopted the policy of nation building. Even though we were a long way from power, our volunteers were patriotic. But today people accept and recognize us.

The BJP government is completing 8 years with this month. This government has been serving the nation for so many years, working for the welfare of the poor and middle class to ensure social justice and security and strengthen the power of women. The world today looks at India with great anticipation. The people of our country look at the BJP with great confidence.

Some parties are involved in activities that divert the attention of the country from important issues. We see the situation these parties are exploring the environment.

The language of every state is the identity of India. Over the past few days, we have seen attempts to stir up controversy over language. BJP volunteers should be careful with these. The BJP finds a reflection of Indian culture in every state language. Respects and worships. We have given importance to each state language in the national education policy.

Since independence, family parties have wasted the country’s precious time on corruption and fraud. Only the BJP can restore the confidence of the youth who have been betrayed by family politics. The BJP sees it as a link to a better future for the country. No longer is the future of the people the BJP. Every youth who aspires to write the code for India’s prosperous future should join the BJP.