“Attention” shines in the symbolic challenges of hybridization of the tribesmen 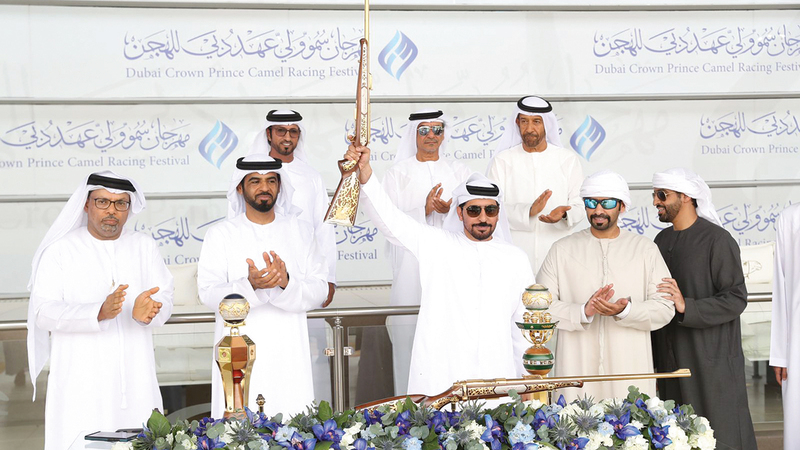 The mount “Intibah” shone in the challenges of the symbols of the camel of the sons of the tribes, within the Dubai Crown Prince Camel Festival, yesterday, which witnessed the participation of 1340 mounts of the age of broadcasting over the course of 36 rounds that were held in the morning and evening periods.

And “Intibah”, owned by Saeed Jaber Abdullah Muhammad, was able to resolve the competition for the Open Bakkar Open Cup with a time of 9:01:7 minutes. A time of 9:01:9 minutes.

Mubashir, owned by Mubarak Huda Butti Demithan Al Shamsi, emphasized its distinction, as it managed to win the Al-Bakr Broadcasting Cup for production after it covered the race distance in a time of 9:01:1 minutes. Al-Mushar won the competition for the Al-Jadan Broadcasting Rifle for production and gifted its owner, Ahmed Sultan. Al-Halami won the title with a time of 9:01:4 minutes.

On the other hand, the camel institutions of the tribesmen shone through their participation in the challenges of the age of broadcasting that were held on the fourth day of the Dubai Crown Prince Camel Festival, which was held over 20 runs for a distance of six kilometers.

Celebration, owned by Mohammed Saeed Obaid Al Mazrouei, was able to win the lead in the main half of Al-Bakkar broadcasting local productions, with a time of 9:11:2 minutes, and “Asbabs” with the colors of Rashid Muhammad Dahrawi Al-Amiri’s slogan won the title of the second half of Al-Bakkar broadcasting Al-Mahjanat Productions, after recording a time of 9: 05:9 minutes, and “Muhaid” won the lead in the third round for Al-Jaadan broadcast the local productions for the benefit of its owner, Muhammad Saeed Obaid Al-Mazroui, with a time of 9:15:2 minutes, while “Jazzaa” owned by Maktoum Saeed Manana Ghadeer Al-Ketbi won the lead in the fourth round for Al-Jaadan Al-Mahgnat broadcast after He reached the finish line after 9:11:3 minutes had passed, and “Shaheen” with the slogan of Hamdan Salem Suleiman Al-Dari won the best time in the morning period, after he won the title of the 12th round of broadcasting Al-Jaadan Al-Mahgnat Productions, with a time of 9:05:1 minutes.

On the other hand, attention is directed today to the six-kilometer track in Al-Marmoum Square, which will witness the first appearance of the camels of Their Highnesses Sheikhs through their participation in the challenges of the age of encounters, which will be held over 33 rounds, 16 in the morning, and 17 in the evening, including four for production camels. Owned by their Highnesses Sheikhs.

• The festival witnessed 36 rounds in the morning and evening periods.