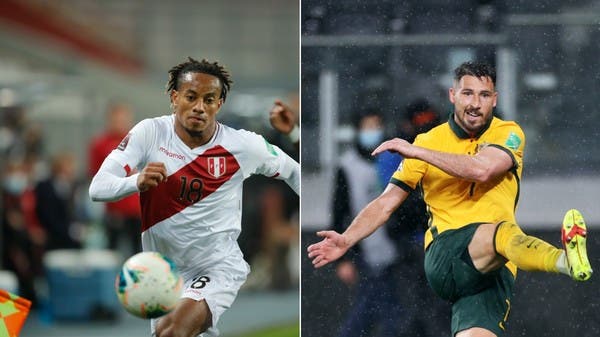 Australia, fifth in Asian qualifiers, and Peru, fifth in South America, battle for the penultimate 31st card of the Qatar 2022 World Cup in football on Monday at Ahmed Bin Ali Stadium in Doha as part of an international supplement.

The winner of the two finals will join Group D teams consisting of defending champion France, Denmark and Tunisia.

The final play-off will be held on Tuesday on the same air-conditioned stadium, in a temperature of about forty degrees Celsius in Doha between New Zealand, the champions of Oceania, and Costa Rica, fourth in CONCACAF (North, Central America and the Caribbean). The winner will join Group E with Spain, Germany and Japan in the tournament scheduled from November 21 to December 18.

Peru, ranked 22 in the world and led by Argentine coach Ricardo Gareca since 2015, hopes to reach the World Cup for the sixth time, after coming fifth in the unified South American qualifiers. It is a candidate on paper to overtake Australia, given the experience of its players and the stage of construction experienced by “Sucrose”.

For its part, Australia, ranked 42 in the world, is seeking to reach the finals for the sixth time as well, knowing that it participated for the first time in the 1974 World Cup and in the last four editions, and reached the second round only once in 2006.

They beat the Emirates with difficulty 2-1 Tuesday in Doha in the play-off to determine the fifth of the Asian continent, with goals from Jackson Irvine and Eden Hrostic.

Australia has great experience in the playoffs, after it fought it more than once when it was in the former Oceania or Asia qualifiers, the last of which was in the 2018 qualifiers and overcame it against Syria in the Asian playoffs (1-1 and 2-1 after the extension) and then the world against Honduras (0-0). and 3-1).

Also, Peru reached the last finals through the play-off, bypassing New Zealand (0-0 and 2-0).

The two teams met previously in the first round of the Russia 2018 finals, and Peru won 2-0 with the goals of Andy Carrillo, the current striker of Al Hilal Saudi Club, and Paolo Guerrero. At that time, the two teams were eliminated from the first round in a group that qualified France and Denmark.

After the victory over the Emirates, Graham Arnold considered that the Socrus team should be the “non-candidate” party with its “back to the wall”.

“I instilled in these guys the idea that they can win by fighting, running and being fierce even if they don’t play well,” said Arnold, who is again missing his absent midfielder Tom Rogic for personal reasons, expecting “a big improvement against Peru”.

His player Martin Boyle, a professional with the Saudi club Al-Faisaly, added, after the victory over the Emirates, where goalkeeper Matthew Ryan starred, “A half-finished work. We need to dust ourselves off and prepare for Peru.”

And about coach Arnold suddenly switching the position of the left winger Matthew Leakey in the last game to the center of the attack, veteran Leakey (31 years), the Melbourne City star, said, “We’ll see what happens in the next game. I don’t know what Arnie thinks, but I’m ready to play a central role again, and there Always the wing.

“It is one match and if we win, we qualify for the World Cup, and I am sure that every player will give everything he has to go to the World Cup again,” Leakey added about the Peru match.

In turn, the Peruvian Celta Vigo midfielder Renato Tapia, who is assisted in the midfield by Saudi Al-Fateh player Christian Cueva, expected a “very difficult match” against a “strong and tough opponent”, at a press conference in Barcelona after beating New Zealand in a friendly 1-0.

His colleague Edison “Orejas” Flores believes, “Our national team plays a final in every confrontation, and this (supplement) is the most important in our lives in recent years.” Monday was declared a holiday in Peru, to make room for the citizens to watch the match.