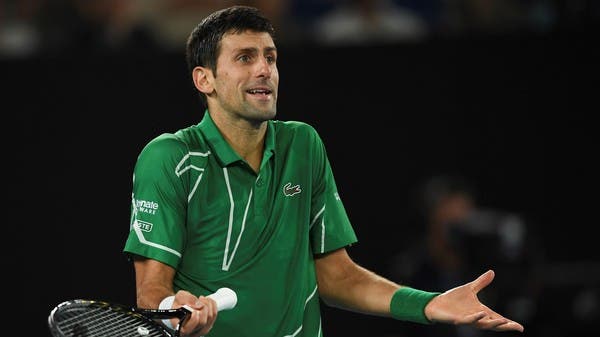 The Australian government canceled for the second time the visa of Serbian tennis star Novak Djokovic, saying that the world number one may pose a danger to the population by not receiving the vaccination against the highly contagious and spreading virus.

Based on his current powers, Australian Immigration Minister Alex Hawke has revoked Djokovic’s visa for the second time after a local court ruled on Monday to overturn the government’s previous decision to cancel the player’s entry visa to the country to participate in the Australian Open championship, which he holds.

The Serbian player resorted to the judiciary to stop his deportation and agree to remain in the country after canceling the visa for the second time, while the authorities ordered the return of the tennis star to the detention center at eight in the morning local time (21:00 GMT on Friday).

The Australian authorities allowed Djokovic not to comply with this order only in the event of a meeting with his defense team to prepare for the next step.

The local newspaper, The Edge, said that the Australian immigration authorities had asked Djokovic to appear before them in an interview on Saturday and that the Serbian player will remain at large until this interview takes place.

The newspaper added that the government is currently talking to Djokovic’s defense team.

“Today I used my powers under immigration laws to cancel the visa of Mr. Novak Djokovic for reasons of health and public order and in the public interest of the country,” the Immigration Minister said in a statement.

According to the article that was applied to cancel the visa, Djokovic will not be able to obtain a new visa to enter Australia for a period of three years, except in exceptional cases related to Australian interests.

And the decision to revoke the second visa may be a prelude to another legal battle in which Djokovic, 34, is seeking a chance to play in the Australian Open, which begins next Monday in Melbourne Park hard courts, and seek to win the 21st title in the major championships and set a world record.

This issue has transcended the boundaries of tennis and reinforced disputes spreading around the world over the rights of people who did not receive the vaccine, and the issue has become a thorny political topic for Australian Prime Minister Scott Morrison, who is preparing to run in the elections scheduled for next May.

Although Morrison’s government has gained domestic support through its tough stance on the security and protection of the country’s borders, it has also been criticized for its handling of Djokovic’s visa.

In a statement, Prime Minister Morrison said: “Australians have made so many sacrifices during this pandemic and they expect and deserve to protect the consequences of those sacrifices.

Morrison added: And this is what the Secretary did when he took this action. Our strong border protection policy has kept Australia safe. As the judicial process continues, I will not add any comments on the case.

Djokovic shares the world record for the number of titles in the Grand Slam with Roger Federer and Rafael Nadal, with 20 titles each.

Despite the decision, Djokovic trained at a Melbourne Park stadium earlier on Friday after he was included in the main draw for the first grand slam of the season on Thursday.

Based on the draw, the first seed is scheduled to face his Serbian compatriot Miomir Kismanovic, the unseeded, on Monday or Tuesday in the first round.

A judicial spokesman said that an Australian court will begin on Friday evening to consider the decision to cancel Djokovic’s visa for the second time.

Djokovic’s lawyers are asking the court to issue a ruling allowing Djokovic to remain in Australia and not deport him before the start of the Grand Slam tournament.