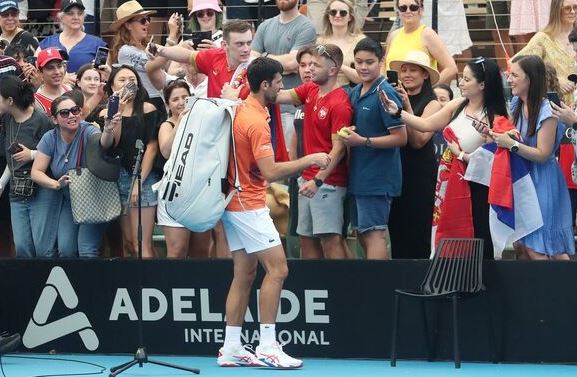 Today, the organizers of the Australian Open tennis tournament issued a warning to the fans who intend to watch the matches from the stands, that they will be expelled if the Serbian Novak Djokovic, the nine-time champion, is targeted. The Serbian player will return to the first of the four major tournaments to be held in Melbourne next week, after being deported on the eve of last year’s tournament due to his refusal to obtain the anti-Covid-19 vaccine. His deportation divided public opinion in a city that saw the world’s longest lockdown at the height of the pandemic.

However, the 35-year-old was received warmly at the Adelaide pre-tournament tournament last week, with many fans backing him before he was crowned champion. Australian Open director Craig Tiley told the Herald Sun: “Any fan who makes fun of Djokovic will not be tolerated.”

“If they disrupt anyone else’s fun – they’ll be out.” And he added, “We do not want them on the field. They can walk away or we will expel them.” Tiley called on fans to “be respectful”.

“One thing I’ve always loved about Melbourne is that there’s a huge appreciation for excellence and for sport, I think more than anywhere else in Australia,” he said. At Rod Laver Arena.