Austrian chancellor: Meeting with Putin was not friendly 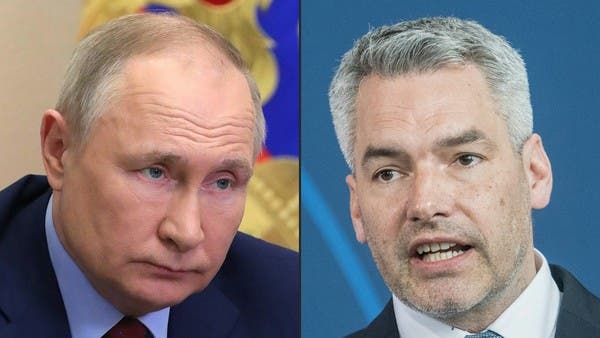 After he became the first European official to meet with the Russian president in Moscow since the start of the Russian military operation in Ukraine on February 24, Austrian Chancellor Karl Nehammer announced that the meeting with Vladimir Putin was not friendly.

In a statement after Monday’s meeting, Nehamer said talks with Putin were “extremely direct, open and challenging”.

He also continued, “The most important message to Putin is that the war in Ukraine must end because in a war there is only a loser on both sides,” according to Reuters. He added that he explained to the Russian president “face to face” what was happening in Ukraine.

He also pointed out that he did not have “any positive expectations after the meeting with Putin.”

The meeting took place at Putin’s official residence in Novo Ogaryovo outside Moscow, while Austrian media, including the Kronen Zeitung newspaper, reported that the talks ended after about 90 minutes.

Hurry up and arrange the meeting

It is noteworthy that a spokesman for the Austrian chancellor revealed, on Sunday, that it was Nehamer who initiated and arranged the meeting with the Russian president during his visit to Ukraine, willing to “do everything in his power to achieve progress towards peace” even if the chances were slim, according to AFP.

Austria is a member of the European Union, but not NATO. Vienna condemned the Russian military operation in Ukraine, and this week expelled 4 Russian diplomats.

It is noteworthy that the Austrian chancellor, who returned to Vienna on Sunday, had met in Kyiv on Saturday with Ukrainian President Volodymyr Zelensky.

Zelensky confirmed at the time that his country was “still ready” to conduct negotiations with Russia after the suspension. He said during a press conference with the Austrian chancellor, who visited Kyiv and the city of Bucha, near the capital, that “Ukraine has always said that it is ready for negotiations and will look for any possibility that leads to stopping the war. At the same time, we are unfortunately witnessing preparations for huge battles, which some say are decisive, in the East”.

The last round of Russian-Ukrainian direct talks was held on March 29 in Istanbul, at which time Ukraine presented details of its main proposals to reach an agreement with Moscow, especially its “neutral status” in exchange for an international agreement that guarantees its security.