Auto Expo 2023: With luxury vehicles, people saw a glimpse of ‘Veer’, which soured the enemy’s teeth. 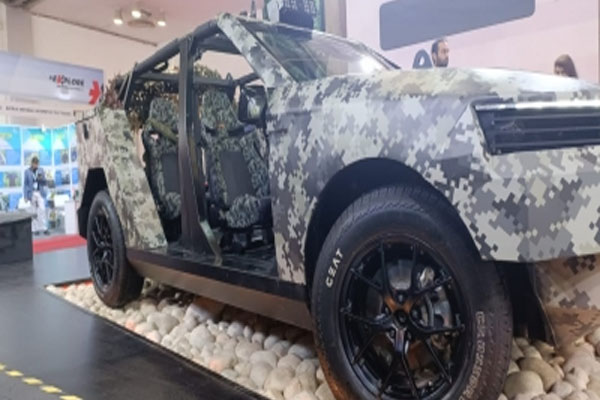 
Greater Noida | In the ongoing Auto Expo 2023 at Expo Mart in Greater Noida, people have seen more than one luxury vehicles, electronic vehicles. Today, along with him, people also saw the hero who sours the teeth of the enemy.

Everyone’s eyes were fixed on this car. This is also because this electronic car has the ability to give a crushing defeat to the enemies on the border, which is named as the electric vehicle ‘Veer’. From infiltrating the forested areas on the border to smuggling, the enemies are no longer safe, because very soon ‘Veer’ may join the Forest Department’s fleet.

Trial of this vehicle is going on. However, its trial is going on in the Indian Army as well, if it is successful then there will be entry of Veer in the army fleet as well. A lot can change with the entry of Veer in the army fleet. It was claimed that there would be no need to light the lights on the outskirts, as the night vision camera fitted in it could keep an eye on both the road and the enemy.

When a glimpse of Veer was seen at the Auto Expo, everyone was surprised. Currently, the trial of this vehicle is going on in the Indian Army and it may soon be included in the fleet of the Forest Department. It is being told that this state-of-the-art vehicle Veer is a completely electric vehicle. The vehicle has a range of over 500 kilometers on a single charge and is capable of wading through 900 mm of water.

This electric vehicle Veer is equipped with night vision cameras, which makes it easy to keep an eye on enemies at night and does not require additional lights. How powerful this vehicle is, it can be gauged from the fact that the electric vehicle Veer can pull two and a half tonnes of weight. It not only gets air lift hooks, but also has a weapon mount. It has a thermal imaging camera installed and also has air bags for safety. Electric vehicle Veer continues to be the center of attraction at the Auto Expo.(IANS)