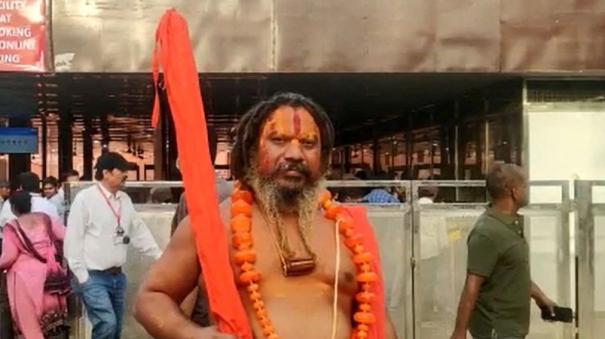 New Delhi: Monk Paramahansa Das, head of Ram Janaki Monastery in Ayodhya, arrived in Agra on April 27 with two of his disciples. He had twice fasted in Ayodhya demanding the establishment of a Hindu kingdom in India and the expulsion of Muslims from the country.

Paramahansa was denied entry to the Taj Mahal with an iron brace in his hand. Thus, the returnee to Ayodhya today (May 5) held a meeting of the Sadhus inside the Taj Mahal and declared that it was to be consecrated. For this he had invited all his disciples to come to the Taj Mahal.

In this context, Paramahansa returned to Agra during the Ramadan prayers held inside the Taj Mahal Mosque the day before yesterday. He tried to enter the Taj Mahal at 8 am, but the police tried to calm him down and send him back until 12 noon. When this was not possible, the arrested Paramahansa was lodged at the Agra Government Guest House. Two of the monk’s disciples have been arrested along with him.

In a video released by Paramahansa, a monk who did not eat or drink water against his arrest, he said, ‘India has been declared a Hindu kingdom by the Haridwar Sadhus Council. So, let us install the idol of Shiva inside the Taj Mahal which was built by demolishing the Shiva temple. Until then, we will not rest. ”