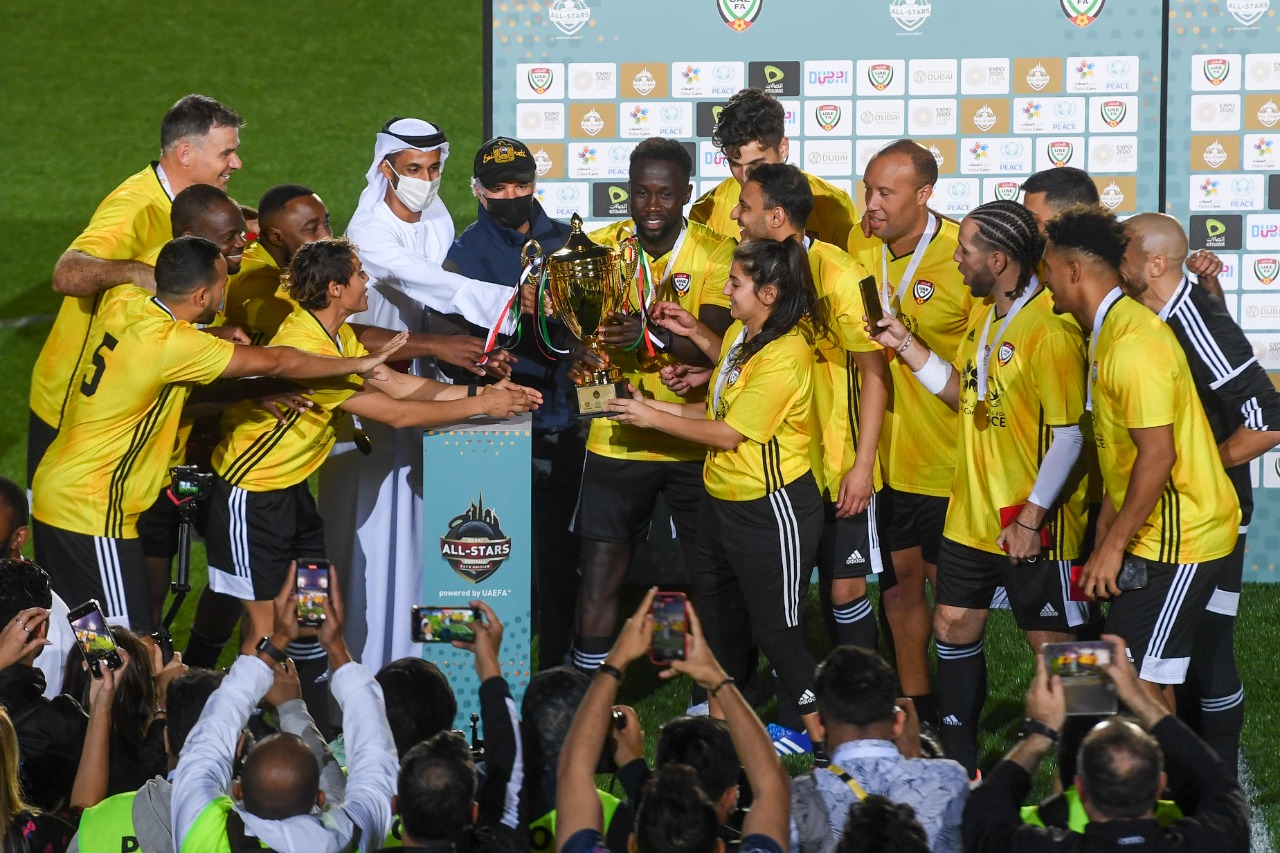 Former French national team star, Manchester City, Arsenal and Auxerre clubs, Bacary Sania, led his team to win the “All-Star Challenge” title, which was held this evening, at the “Sports Arena” in “Expo 2020 Dubai”, launched by the Emirates Football Association and “Expo”. 2020, in cooperation with the Dubai Department of Economy and Tourism, Dubai Cares, Football for Peace, Dubai Sports Council and Adidas.

Bacary Sagna’s team needed to settle the match by penalty kicks (3-2) to secure the title, and beat in the final match at the expense of the team of his compatriot Patrice Evra, the former star of France and Manchester United, after the original time of the match ended in a positive tie “2-” 2″.

And the team of Patrice Evra, the runner-up of the session, was formed by the CEO of the Dubai Future Foundation and a member of the Emirates Football Association Council Khalfan Juma Belhoul, a member of the National Teams Committee of the Football Association Ahmed Al Tunaiji, the Egyptian singing star Mohamed Hamaki, the Turkish chef Burak, and Laila Al Muhairi, the player of the women’s national football team, And the Commissioner-General of the Australian Pavilion at Expo 2020 Justin McGowan, the legend of the Irish national team Robbie Keane, the Dutch player Nigel de Jong, the star of “Freestyle” Lisa Zimochi, and the futsal player Tariq Aman, while the influencer on social media platforms Just Sol assumed the role of coach the team.

For his part, Sheikh Rashid bin Humaid Al Nuaimi confirmed that the support provided by “Expo 2020” was the basis for the success of the “All Star Challenge” matches, which included in its teams, a constellation of football legends, famous art and various sectors, who gathered on one stadium, in a new confirmation. However, Dubai brings the world together, inspired by the approach of “Expo 2020”, which brought together under one dome the pavilions of 192 countries, in a unified melting pot for all sectors of international societies from culture, economy, art, politics and others that all met in Dubai.

He explained in a press statement: “Everyone here complements some in this gathering, in order to emphasize what “Expo 2020 Dubai” succeeded with distinction and uniqueness in presenting to the international community of all its spectrum, including sports, of course, especially that the proceeds of tickets for the “All-Star Challenge” matches will go to “Dubai Cares”, in addition to the International Football Association “FIFA”, which has a foundation that supports athletes around the world.”