Bala: I aim to win the league and the “Asian Champions” with Al-Ahly youth 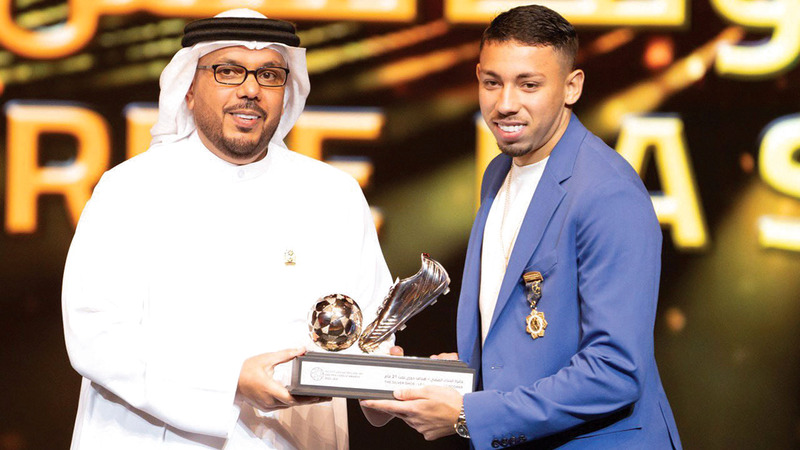 Shabab Al-Ahly player, Brazilian Guilherme Bala, confirmed his happiness for winning the Silver Boot for the Under-21 League top scorer last season, which he received at the Professional League Awards ceremony, pointing out that he seeks to win the ADNOC Professional League and AFC Champions League titles with the Dubai Knights in the season. the new.

Bala told the Brazilian newspaper, TNT Sport, that he is proud of his return in his first season with Al-Ahly youth, explaining: “Receiving the title of top scorer in the U-21 League in my first season with the team is a wonderful thing, in addition to winning the Silver Boot award, it is the culmination of the effort. What I did, especially since the team won the league title as well.”

He added, “I know that I am at the beginning of my career and I need to grow and develop further in the coming period, and that I have a lot to learn, and at the same time, being the top scorer and participating in a number of matches with the team indicates that I am on the right path.”

He continued: “Winning individual awards, whether the title of top scorer or the best player is important for me and for any player, but basically I think that the collective titles and the club’s winning of titles is the most important and most influential, because when the team is good enough, it will result in my return being good.” .

The former Brazilian Flamengo player confirmed that he aspires to participate more with the first team in the new season, and said: “The Shabab Al Ahly team includes a wonderful group of players, whether for citizens or foreign players, and I aspire to achieve many titles with the Dubai Knights in the new season, The most prominent of these titles is winning the League and the Asian Champions League, and there is no doubt that this requires a great effort from the players and to give everything we have.”

It is noteworthy that Guilherme Bala, who turns 21 on September 16, joined Shabab Al-Ahly last season, coming from the Brazilian club Ferrovaria in a free transfer deal with a contract that extends until 2024, and he starred greatly with the under-21 team, scoring 17 goals, while participating with the team. The first in 11 matches, he scored a goal in the ADNOC Professional League and played eight minutes in the League Cup.