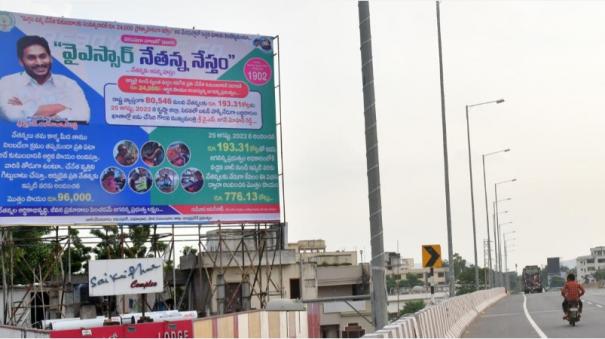 Visakhapatnam: Andhra Chief Minister Jaganmohan Reddy announced an immediate ban on plastic banners in Andhra Pradesh. He assured that Andhra Pradesh will be the first state to completely ban plastic products by 2027.

Yesterday, the Andhra government entered into an agreement with the famous Parle company to remove and clean the plastic waste found in the sea in the state of Andhra Pradesh. Andhra Chief Minister Jaganmohan Reddy, who participated in the event, said that plastic has already been banned in Tirumala.

It has been well received by the devotees. Following this, the Tirupati Municipal Corporation authorities have imposed a ban on plastic products in Tirupati city as well and are actively enforcing it. Due to the cooperation of the people, the pollution of water and air has reduced there. Considering this, it has been decided to ban plastic products across the state. In the first phase, the Andhra Pradesh government is banning plastic banners. This is effective immediately. Instead of plastic banners, banners can be placed on fabrics. Andhra Pradesh should become a plastic-free state by the end of 2027. This should be our gift to future generations. It is important that we take care of their health.

Currently, plastic waste is occupying a distance of 40 km in the sea. Due to this, many marine life, including fishes, have become extinct. To recover this, the Parle company has been entrusted with the task of removing marine waste. Recycled waste will be sold to companies like Adidas, America Express, Mercedes-Benz to make spare parts. The contract for this has now been done. Through this, the state of Andhra Pradesh will receive Rs. 16 thousand crore profit. 20,000 people will also get employment. Chief Minister Jaganmohan Reddy spoke thus. Ministers, Parle company executives and students participated in this.