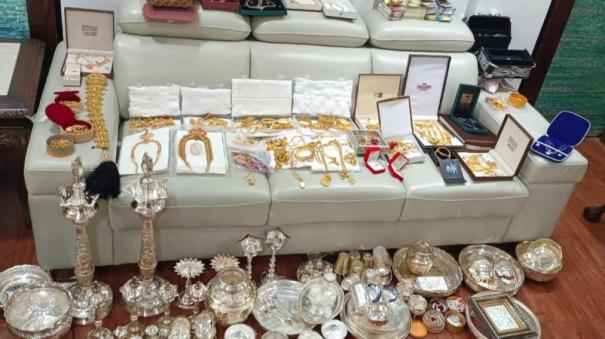 The inspection was carried out at locations owned by 21 government officials, including Bangalore North University Registrar Janardhanam, Deputy Election Commissioner Siddappa, a Shivalingaiah who works as a plantation worker in the Bangalore Development Authority and an engineer working in the Irrigation Department, Public Works Department and Rural Development Department. Countless crores of cash, gold, diamond jewelery, silverware and property documents were seized.

The test was conducted at the Bangalore home of Shivalingaiah, who works as a plantation worker at the Bangalore Development Authority. Authorities also raided homes belonging to him in Mysore and Chennai.

They then seized the millions of rupees that had been stashed under the bed. They also confiscated unaccounted gold, diamond and silver jewelery.

They also seized a large number of property documents from places including Bangalore and Mysore. The seizure of goods worth crores of rupees from the house of a plantation worker came as a shock.

According to the Anti-Corruption Police, the Shivalingaiya plantation worker is only on government record. He has earned crores of rupees by getting huge commission in allotment of houses in Bangalore Development Authority. Officers who found the trapped items during a search of his home asked, ‘Does the plantation worker have so much property?’ As surprised. Full details will be released after his assets are duly assessed, ”Naur said.