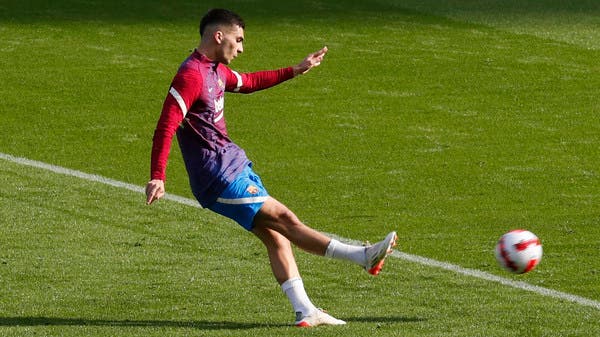 On Monday, Barcelona extended the contract of French defender Samuel Umtiti until 2026, in a move that gave him financial space to register his new striker Ferran Torres from Manchester City, the English Premier League champion.

And Torres was not available to play with the Catalan team after joining two weeks ago, because his registration would conflict with the spending rules in La Liga.

By extending Umtiti’s contract by three years, Barcelona will be able to distribute his salary over a longer period of time, reducing Barcelona’s burdens in the current financial year.

Barcelona said that his defender will “reduce part of his salary, which he would have received in the remaining year and a half of his previous contract” thanks to the player’s “effort”. “The extension of this contract will not impose more financial burdens on Barcelona,” he added.

The extension comes surprisingly after speculation that Umtiti would be sold to reduce the club’s debts of more than one billion euros. The contract of the previous player amounted to 18 million euros per year.

Umtiti, 28, was an important player in Barcelona’s squad, before he receded as a result of a series of injuries that kept him out of the first team.

“By extending this contract, Barcelona will be able to enhance the ‘Financial Fair Play’ quota and thus register Ferran Torres with the Spanish Football League,” Barcelona added.

Barcelona also hopes to reach a similar solution with its French striker, Ousmane Dembele, whose contract expires at the end of the season.

The next Torres, with an estimated deal of 55 million euros, from City, will need a negative smear for the Corona virus, to start his career in the Spanish Super Cup this week in Saudi Arabia.

Barcelona will play Real Madrid on Wednesday in the semi-finals, and the winner between them will meet the qualifier between Atletico Madrid and Athletic Bilbao on Sunday in the final.