Barcelona, ​​stumbled on its continental home, to reserve its place in the semi-finals 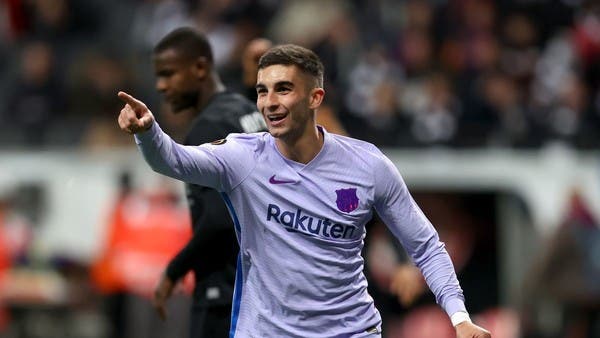 Barcelona, ​​which has recently regained its luster, hopes to overcome the reality of its stumble at home in the continental competitions this season, by defeating its guest Eintracht Frankfurt, Germany, on Thursday in the second leg of the European League “European League” quarter-final in football and booking his ticket to the semi-finals.

The Blaugrana needed a Ferran Torres goal in the second half to snatch a draw in Frankfurt last week, which opened the door to all possibilities at the Camp Nou.

Despite the bright image that he has shown in recent months, the Catalan club has only managed to win at home once this season, as it achieved its orphan victory at the expense of Ukraine’s Dynamo Kyiv 1-0 during its failed adventure in the group stage of the Champions League competition ( third in his group).

Since his move to the “Europe League”, the second most important competition in Europe, for the first time since 2004, Barcelona tied at home against Napoli, Italy, 1-1, and Galatasaray, Turkey, with a negative score, before deciding its two home matches outside its stronghold with a 4-2 and 2 victory. -1 in succession.

Despite canceling the goal advantage away from home, Barcelona seems to be a candidate to settle the match thanks to its impressive results, as it continued its difficult victory over Levante 3-2 on Sunday, its string of victories in “La Liga”, achieving its seventh win in a row to advance to second place, and it did not taste the taste of losing in its 15 matches. The latter in various competitions, during which he achieved 11 victories and four draws.

Before his former midfielder Xavi Hernandez arrived in Catalonia to take over the technical duties in November 2021, Barcelona was ranked ninth, but after five months, the “Blaugrana” advanced to the runners-up and it became difficult to stop it.

Barcelona has largely guaranteed its participation in the main continental competition next season, but it wants to be a party to the final match in Seville on May 18 in order to end its season with a gold medal.

On the other hand, Eintracht Frankfurt occupies ninth place in the “Bundesliga” after its poor results, as it was unable to win any of its last five matches, but despite that, the numbers against the Spanish clubs tilted in its favour, as it only lost once, specifically against Real Madrid in the final European Champions Cup 1960.

At least 20 killed in explosion at Kabul educational center