Barcelona stumbles with a draw with Granada 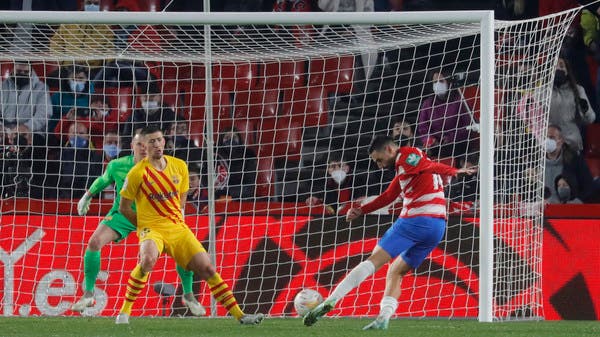 Barcelona gave up its lead and drew 1-1 with its host Granada during the match that brought them together on Saturday in the twentieth round of the Spanish Football League, which also saw Levante beat Mallorca 2-0, and Real Sociedad beat Celta Vigo 1-0.

Barcelona advanced with a goal scored by Luc de Jong in the 57th minute, and Antonio Puertas equalized in the 89th minute. The match saw Pablo Martin Paez “Gavi” sent off in the 79th minute after receiving two yellow cards. Barcelona raised its score to 32 points in third place, while Granada’s balance stopped at 24 points in twelfth place.

In the second match, Levante beat Mallorca 2-0. Levante scored Roberto Soldado in the 47th minute and Jose Luis Morales in the seventh minute of overtime for the match. Levante finished the match with ten men after Jose Campania was sent off in the 82nd minute.

Levante raised its score to 11 points in the last twentieth place, and Mallorca’s balance stopped at 20 points in fifteenth place.

In the third match, Real Sociedad defeated Celta Vigo with a clean goal scored by Mikel Oyarzabal in the 13th minute.

Sociedad raised its score to 33 points in fourth place, and Celta Vigo’s balance stopped at 23 points in thirteenth place.