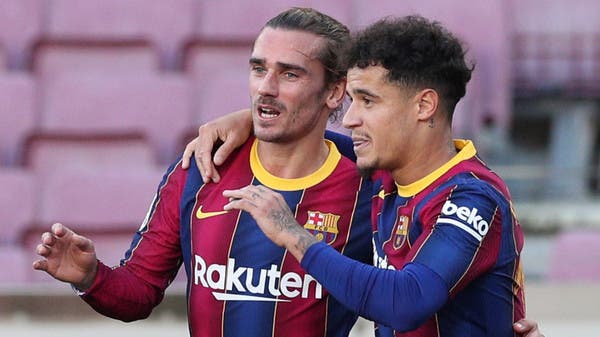 
French Antoine Griezmann and Ousmane Dembele, and Brazilian Philippe Coutinho, are at the top of a list of at least nine players that Barcelona Football Club will be willing to give up this summer, according to a news report on Thursday.

And the (Sky Sports) news network reported on its official website today that although the future of Argentine magician Lionel Messi with the Catalan team is completely guaranteed, the club’s management will not be able to invest in more additions to the team except by arranging the departure of some important players.

The network indicated that Griezmann is undoubtedly the most striking name among the group because of the large amount incurred by Barcelona’s treasury to sign him from Atletico Madrid two years ago, which exceeds 120 million euros, as he was the owner of the fifth most expensive transfer ever at that time.

Sky explained that Coutinho, Dembele and Denmark international striker Martin Braithwaite are also at the forefront of the publicity campaign to obtain funds to bolster the financial resources of the club, which is saddled with huge debts that have been exacerbated by the Covid-19 pandemic.

Barcelona believes that Braithwaite in particular has increased in value due to his performance with his country at the European Nations Cup (Euro 2020), knowing that he was one of the cheapest arrivals in Catalonia, where his transfer cost was approximately $ 20 million, the value of the penalty clause in his contract with His former club Leganes in February 2020.

Griezmann is considered one of the highest-paid players in world football, while Barcelona also needs to cut its players’ wage bill, which has led to recent discussions about a potential exchange that would have seen him return to Atletico and Saul Niguez joining Barcelona – but the two clubs have been unable to reach an agreement, according to Sky. The same source added that Griezmann’s high salary means that there are only a few clubs that can afford him.

Sky also hinted that Dembele and Clement Lenglet are other high-profile names that Barcelona would be willing to listen to offers – or at least include them in the swap deals for their goals – as well as goalkeeper Neto and right-backs Emerson and Moussa Waghi.

At the end of its report, the network revealed that the Barcelona administration is in talks with a number of veteran players such as Gerard Pique, Sergio Busquets, Jordi Alba and Sergi Roberto – about extending contracts and wants them to follow Messi’s example in reducing their salaries.

The only CM Jagan who speaks four languages ​​.. will be the Prime Minister forever: YCP MLAs

That word caught the eye of many .. Naughty comments on Vanitha Vijay Kumar’s post!

Auto demand in the market is less than PV tractors

The horrible truth that Burger said .. Akkachellele murderers .. but sadly.!