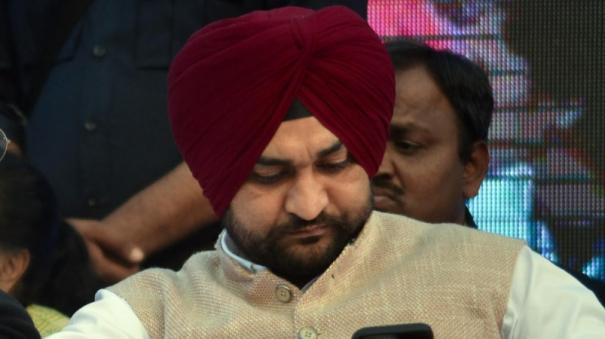 Chandigarh: “They say they will pay Rs 1 crore to forget the case against the minister and go abroad,” said a female coach who had filed a sexual complaint against the Haryana sports minister.

Last Friday, a female athletics coach made sexual allegations against Haryana Sports Minister Sandeep Singh. In this situation, the woman appeared before the Special Investigation Team of Chandigarh Police on Tuesday and gave an explanation. Speaking to reporters later, he said: “A special inquiry committee has been set up regarding my complaint. I told them in detail everything that happened. The Haryana chief minister is influencing this inquiry.

I am pressured to be quiet. I heard the Chief Minister’s statement. He seems to be on Sandeep Singh’s side. No pressure from Chandigarh police. But the Haryana police are pressurizing me. “I have been receiving phone calls continuously saying that I will be paid Rs 1 crore per month to go and live in any country of my choice,” he said.

Earlier, in December, a female athletic trainer made sexual allegations against Sandeep Singh, who was serving as the sports minister in the BJP-ruled state of Haryana.

The female coach met reporters at the office of the opposition Indian National Lok Dal and went public with the sexual assault of minister Nadeep Singh. “Minister Sandeep Singh first contacted me on Instagram. He told me that my sports certificate was pending and I had to meet him in person in this regard. I went to meet the minister with other documents and went to his house. Then he sexually transgressed. He kept texting and threatening me. “He sexually harassed me from last February to November. So, appropriate action should be taken against him,” he said.

The incident has created a stir in Haryana’s political circles. In this case, the Chandigarh police registered a case against Sandeep Singh under the sexual harassment section yesterday. Subsequently, Sandeep Singh resigned as minister.