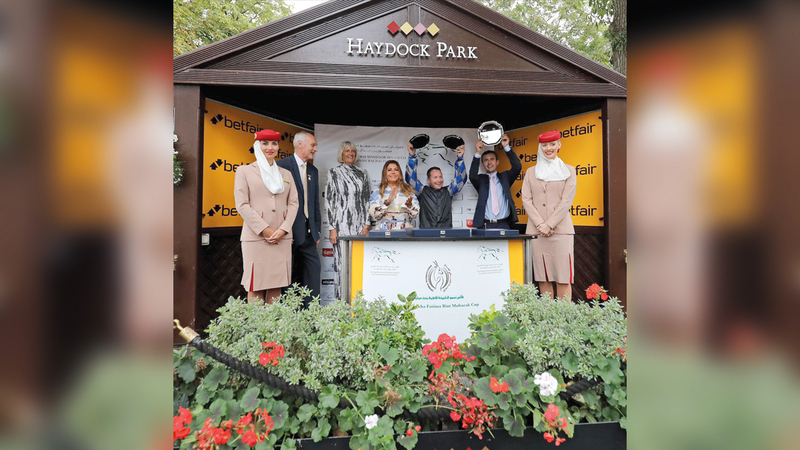 The mare, “Bayan Athba” by Athba Racing, defended her title when she was crowned champion of the HH Sheikha Fatima bint Mubarak Cup race for purebred Arabian horses (for the third category) at the English Haydock Racecourse. The skilled “Nesma” of Sheikh Nasser bin Mohammed Al-Hashar won the Al-Wathba Cup, the Negroda Pechora, at the Polish track Slozwijk, which was held yesterday afternoon, under the auspices of the 14th edition of the racing festival of His Highness Sheikh Mansour bin Zayed Al Nahyan. The mare “Bayan Azba”, under the supervision of coach Philip Collington, and the leadership of Taj Oshi, managed to control the race brilliantly. The prize money for the race was 14,000 pounds, and was held in conjunction with the biggest Haydock races of the season.

After an exciting struggle, “Bayan Athba” outperformed by 1.25 lengths over its traditional rival “Obiya Athba” for Delmon Racing, under the supervision of Peter Hammer Sly and led by Ben Curtis, recording a time of 1:50:54 minutes, while “Zain Anchor Generation” came in third place. Zain Arabia Racing led by David Allen.

The Stallions-Ngroda Pechora Cup, for a distance of 2000 meters, on the Polish track in Slozwijk, was distinguished by the challenge and the participation of seven horses at the age of only three years, who competed strongly for financial prizes of 5000 euros. “Nesma”, led by K Krzybowski, and under the supervision of Si Friese, won the title of the race after a distinguished performance and a worthy effort, 2.5 length ahead of “Jolin de Bowie” by Abdelhadi Al-Mutair, under the supervision of M Kasperzyk, and the leadership of Ai Wojcic, recording 2:41:10 minutes, while it came The third “Java Devialtier” of the Awad farm led by De Spatabikov.