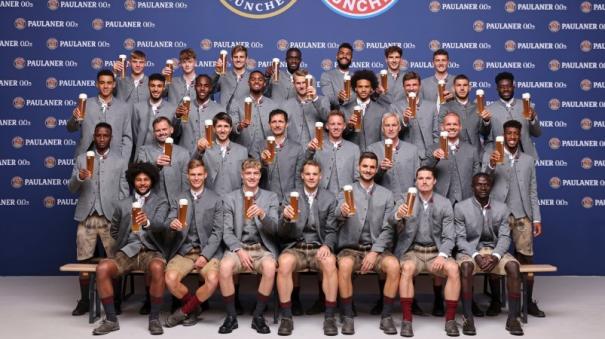 Bayern Munich, one of the German football club teams, has held a traditional photoshoot. Two of the players who participated in it have posed without holding a cup of wine because of their religious beliefs. It has gained attention on social media.

The team is currently playing in the German Bundesliga. As part of the Oktoberfest celebration, Bayern players pose for a photo with goblets of wine in hand. Sadio Mané and Noussair Mazraoui, who are playing in the team, took a photo without holding the wine cup.

Both of them are followers of Islam. Because of that they have avoided it on the basis of religious belief. Their faith has allowed Bayern to follow through with attention. Both of them joined the team in the current season.

He has scored four goals in five matches for Bayern. Players have done this in the past because of their personal beliefs in the sports world. Examples include Ronaldo putting down a bottle of Coca-Cola and Australian players skipping the champagne celebration during the Ashes victory celebration for Usman Khawaja. It is noteworthy that some players have played without Madhu Vastu’s name on their jerseys.