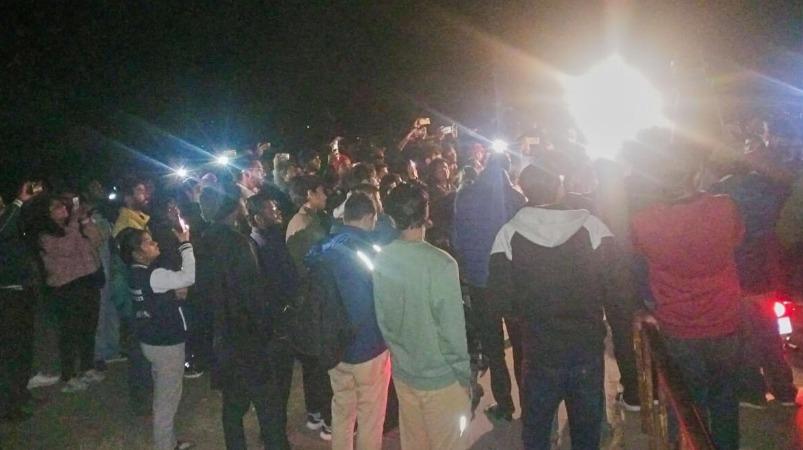 New Delhi: BBC released a documentary ‘India: Modi Questions’ on the religious riots that took place during Prime Minister Modi’s tenure as Gujarat Chief Minister. The Supreme Court also acquitted Prime Minister Modi of the charges in the Gujarat riots case saying there was no evidence against him.

In this case, the student council president Ayesha Ghosh announced that this documentary will be screened yesterday at 9.00 pm at Delhi Jawaharlal Nehru University (JNU). ABVP, the BJP’s student body, strongly opposed this.

The JNU administration banned the screening saying that they did not get their permission. But a section of students regardless of this gathered in front of the Student Council office.

In this case, 15 minutes ago, the electricity was cut off in the area. However, students started viewing the downloaded report on their mobile phones and laptops with the help of QR code.

In this case, at around 10.30 pm, the students who were watching the video were attacked by pelting stones. Students protested against this under the leadership of Ayesha Ghosh. ABVP demanded action against the students. But ABVP students denied the complaint against them. The university administration is investigating the matter.

Earlier the BBC recording was first screened at the Central University of Hyderabad. In spite of the opposition, the student body of the university called the Brotherhood Prayer Movement screened it.

A complaint has been lodged with the police on behalf of ABVP and an investigation is underway. The video was also screened in the Kerala Government Law College amid protests. The investigation continues here as well. In this case, students have announced that the recording will be screened in West Bengal state universities as well.

Last Friday, according to the central government’s order, the BBC’s registration was removed from social networking sites like YouTube and Twitter. However, Trinamool Congress MPs started sharing some other foreign internet links of this article.

The State Congress Party has announced that it will screen the documentary in state and district capitals in Kerala on Republic Day on January 26. As the Lok Sabha elections approach, the opposition seems to be gearing up to use the BBC’s recording as a political weapon against the BJP.