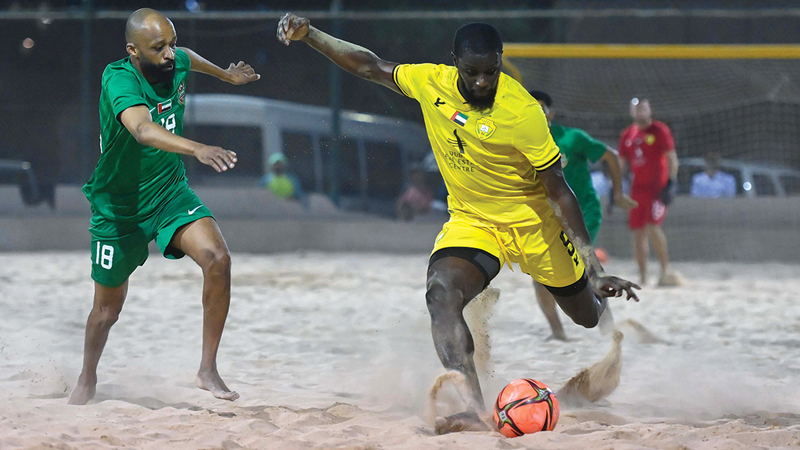 The Football Association said that the beach soccer competitions achieved the goals of the development process of the target game during the 2021-2022 sports season through deliberate steps, which contributed to increasing the number of its practitioners.

And he added in a statement yesterday: “The first steps of this support began with the formation of a committee specialized in all matters of beach soccer activity and its affiliates headed by Ali Hamad Al-Badwawi, member of the Board of Directors of the Football Association, and the membership of an elite group of experts in the field of the game, and as soon as the committee was formed, work began on the process of developing the ball. Beach soccer, starting with the resumption of local competitions, which ignited the spirit of competition and friction between the teams participating in the Emirates Beach Soccer League and Cup, which were organized during the current sports season 2021-2022.

She added: The confrontations of the league competition, which started on January 29, witnessed the participation of 7 clubs (Shabab Al-Ahly, Dubai Police, Ultras Junoon, Dibba Al-Hisn, Al-Ashaws, Al-Wahida and Dubai Municipality), and these teams competed with great enthusiasm during the competition rounds, all the way to the final match. The Dubai Police Club team won the league title and shield, and Dibba Al-Hisn was the league’s runner-up.

The statement continued: The beach soccer activity last March was not limited to the league competition only, but also included a successful initiative by Walid Al-Mohammadi, captain of our national beach soccer team, in cooperation with the Emirates Football Association and the FIFA Beach Soccer Committee, which was represented in a championship The Emirates Beach Soccer, the first of its kind in the region and the Arab world for juniors, is on the shores of Jumeirah Beach Residence in Dubai.

The tournament witnessed the participation of 8 local teams, which included 80 young players, and the Star Academy team won the title, after an exciting competition over the course of a whole day, and with a large audience following it, as well as keen to follow its competitions, Brazilian Ramiro Amarelli, coach of our national team.

The official website of the FIFA Beach Soccer Committee highlighted this initiative, which it described as distinctive in order to spread the game among the younger generations, and motivate them to practice it.