Because of Kremenchuk, Zelensky calls for an immediate UN investigation 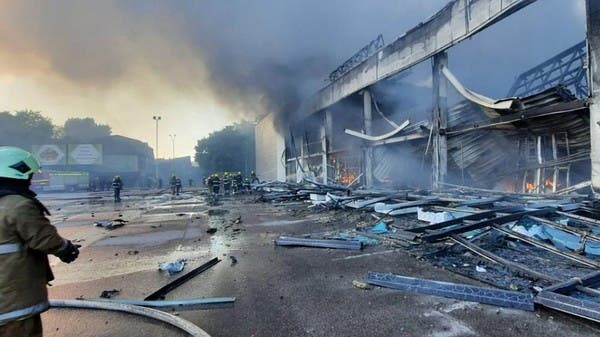 After the latest strike that left 20 people dead, Ukrainian President Volodymyr Zelensky called on the United Nations on Tuesday to send an investigation committee to the site of a Russian missile that targeted a shopping center in the central city of Kremenchuk.

In a speech to the UN Security Council, Zelensky said that his country proposes to the United Nations to send a special representative, the Secretary-General of the United Nations or a special committee to the site so that it can independently obtain information and verify that it is indeed a Russian missile attack, according to him.

With them is the Russian ambassador.. a pause of mourning

He also asked for a minute of silence for the lives of all Ukrainians who were killed during the war, calling for Russia to be expelled from its permanent seat in the Council and the establishment of a court to look into the “daily terrorist acts” committed by Moscow, as he put it.

At the end of his speech, which was his second before the Council after a first speech on the fifth of April, he said, “Please, please, honor the memory of all the Ukrainians who were killed during this war, all adults, all children, tens of thousands of people. I ask you to observe a minute of silence to honor their memory.”

In addition, the Ukrainian President stood there, followed by the fifteen members of the Council, as well as all those present in the hall, according to what was shown by the scenes broadcast by the internal United Nations channel.

The representative of Russia, Assistant to the Russian Ambassador, Dmitry Polyansky, also stood on what the United Nations channel showed.

It is noteworthy that the Russian strike in Kremenchuk led to the death of about 20 people, and dozens of wounded and missing.

Russia denies that it targeted a civilian facility, stressing that it bombed a weapons depot.

In turn, Assistant Secretary-General for Political Affairs Rosemary Di Carlo said that the cycle of death and destruction must stop, in the interests of Ukraine, Russia and the world at large, detailing the attacks committed in recent days in Ukraine.

Prior to the emergency meeting, which came at the request of Kyiv, six countries, France, Ireland, Norway, the United Kingdom, the United States and Albania, joined by the Ukrainian ambassador to the United Nations, strongly condemned the intensification of Russian missile strikes on the territory of Ukraine, targeting residential areas and civilian facilities between June 25 and June 27. Among them, the one that targeted Kremenchuk.