Becoming the 5th largest economy in the world – Every Indian should be proud, says PM Modi 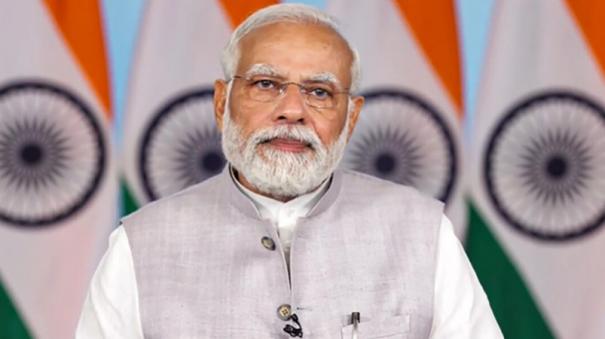 Surat: Prime Minister Narendra Modi proudly said that India has emerged as the 5th largest economy in the world is no mean feat.

In the 75th Amrita Jubilee year of independence from colonial rule, India surpassed Britain to become the world’s 5th largest economy. This progress is no mean feat. Every Indian should be proud of this.

It should not be left alone. This enthusiasm must be maintained. Need to move forward. India has just overtaken Britain.

India ranks next to USA, China, Japan and Germany in world economy. Becoming the 5th largest economy in the world has given us the confidence to work harder and achieve bigger goals.

Farmers should engage in organic farming. This way you can get high yield at low cost. BJP is ruling in Gujarat and in the centre. With this twin engine state we can achieve more.

The state of Gujarat has a good health infrastructure. There are many multi-specialty hospitals located here. They provide world class treatment to the people of Gujarat state.

The number of medical colleges in Gujarat has increased from 11 in the last 20 years to 31 at present. AIIMS Hospital to come up in Rajkot soon. Apart from that some more new medical colleges are going to be established in Gujarat.

A large-scale medical camp is currently underway here. Doctors should inquire about the lifestyle of the people who come to this medical camp. The importance of nutritious foods should also be highlighted. Doctors should inform them that through this they can live a disease-free life. Thus he spoke.