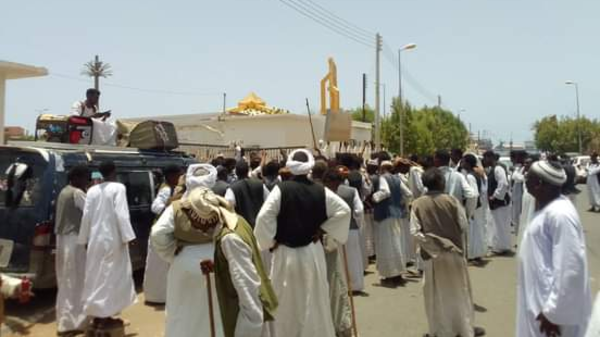 The Supreme Council of Beja Opticals and Independent Al-Amoudia in Sudan announced on its Facebook page today, Monday, the closure of the national road to Port Sudan, Khartoum.

Last Friday, the Beja Council decided to close the Sudanese Company for Mineral Resources and Mining in the Red Sea State, “in the context of the announced escalation and after the expiry of the time period given by the Council to the ruling authority” in Sudan.

And last Tuesday, the Council announced that excluding the eastern regions in any political settlement would have disastrous consequences for the country.

“We will not allow the elites to implement their plans, which they have been implementing since independence, by exploiting resources and marginalizing the people of the East,” the council added in a statement on its Facebook page.

The statement also continued, “If those in power want to negotiate, they must implement the terms of the contract and implement the decisions of the fateful Sankat Conference.”

An invitation to meet the Supreme Council of Beja Opticals

It is noteworthy that the Beja glasses are among the supporters of the exceptional measures imposed by the country’s armed forces last October, declaring a state of emergency and dissolving the government.

In January, the Vice-President of the Sovereignty Council, Lieutenant-General Mohamed Hamdan Dagalo, issued a decision to form a committee from the Supreme Council of Beja Opticals and Independent Al-Amoudiya, to implement the conditions of “Qild”, to conduct societal reconciliations and complete the tradition between the signatory parties in eastern Sudan, and to seek the assistance of people of opinion and wisdom.