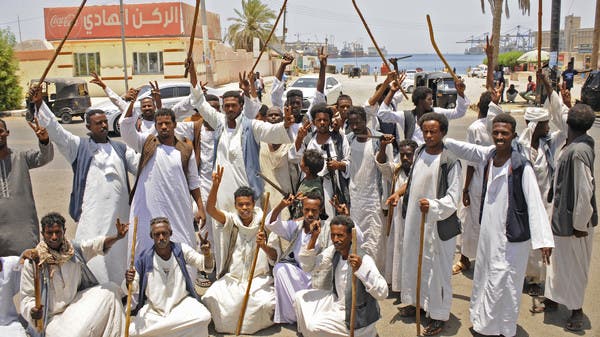 Today, Tuesday, the Beja Optical Council announced the lifting of its sit-in in all regions of eastern Sudan, after the resignation of the Governor of the Red Sea, Abdullah Adrob.

According to a leader in the Beja glasses council, the council will publicly thank and honor the resigned governor for the step of resigning in an attempt to end the crisis in the east.

Earlier in the day, the sources of Al-Arabiya and Al-Hadath channels confirmed that the governor of Bahr Al-Ahmad State submitted his resignation to the head of the Sudanese Sovereign Council, Abdel-Fattah Al-Burhan, through the Minister of Federal Government.

Since last week, hundreds of Sudanese protesters in the east of the country have been organizing a sit-in to demand the dismissal of the governor of the Red Sea state, accusing him of supporting the peace agreement.

On Monday, dozens of protesters in the coastal city of Port Sudan in eastern Sudan closed main roads leading to this main port on the Red Sea, in protest of a peace agreement signed by the Sudanese government in Juba with a number of armed rebel movements in 2020.

The part related to eastern Sudan in the agreement had angered the Beja tribes, who are considered to be the original inhabitants of eastern Sudan, arguing that those who signed the peace agreement from the east do not represent the region.

On the other hand, a number of eastern tribes support the agreement signed in Juba and demand that it not be repealed.

Refusing to break the agreement on the east of the country, the Beja tribes in September closed the country’s main ports on the Red Sea coast for six weeks until they stopped their movement after the October 25 measures, but gave the government a deadline to resolve the crisis.