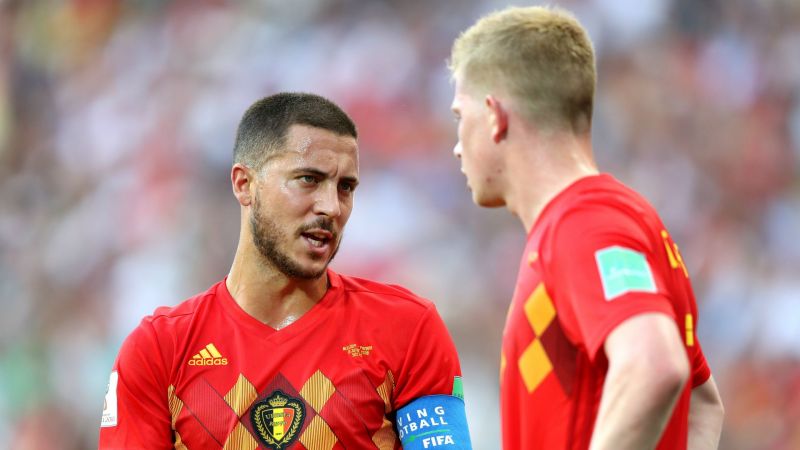 Belgium is eagerly awaiting the recovery of its two stars, Kevin De Bruyne and Eden Hazard, to participate in the fiery summit against Italy tomorrow at the Allianz Arena in Munich in the quarter-finals of the European Football Cup. Borussia Dortmund’s German striker Torgan Hazard led Belgium to the final price by scoring the winning goal that stripped Portugal of the title, but the fitness of his older brother, Real Madrid’s Spanish star Eden and Manchester City playmaker De Bruyne, is the main concern for Belgium before facing the Azzurri in Munich.

De Bruyne went out early in the second half against Portugal due to a left ankle injury, following an intervention at the end of the first half by midfielder Joao Paulinho, while captain Hazard injured the hamstring muscle of his left thigh three minutes before the end of the match. Neither of them trained on Wednesday as the Belgian medical staff worked hard to prepare them for the Italy clash.

And the Spanish coach of Belgium, Roberto Martinez, admitted that none of the players is likely to be 100% in Munich, adding, “But we will take advantage of every day to make them as ready as possible.” Great hopes are pinned on De Bruyne to lead Belgium to the semi-finals scheduled for next Tuesday and face the winner in the second quarter-final match, also scheduled for tomorrow, between Spain and Switzerland in St. Petersburg.

Martinis is studying his alternative options in the attacking midfield, where Atletico Madrid winger Yannick Carrasco is likely to replace Hazar, and Napoli star Dries Mertens will replace De Bruyne. Martinis expects Italy to “attack from the first second, they will be very organized”, stressing the need for De Bruyne to lead the Belgian counterattacks.

Chelsea midfielder Jorginho, who faced De Bruyne with Manchester City in the Champions League final last month, warned his Italian teammates against the Manchester City star. “De Bruyne is a player who makes the difference,” Jorginho said. “We have to stop him because he always finds space. He can be really dangerous.”

Belgium is seeking in its second successive participation after its exit from the quarter-finals in 2016, and the sixth in its history to reach the semi-finals for the third time in and repeat its achievement in at least 1980 when it lost the final match against West Germany 1-2, knowing that it came third in 1972 by losing to Hungary With the same result.

Belgium, the third World Cup 2018, hit hard in the current continental edition by achieving four consecutive victories while keeping a clean sheet in three of them, confirming its worth to top the world rankings as the best team in the universe.

record boosting
The case is not different with Italy, which in turn achieved four consecutive victories with one goal conceded and was in the final price when it beat Austria 2-1 after extra time thanks to the goals of substitutes Federico Chiesa and Matteo Pesina. The victory over Austria strengthened Italy’s record in the number of matches without defeat, as it raised the number to 31 matches (26 wins and 5 draws), including 12 consecutive victories, erasing a number dating back to 1939. Italy’s last loss is due to its 0-1 fall to Portugal in the Nations League On the tenth of September 2018.