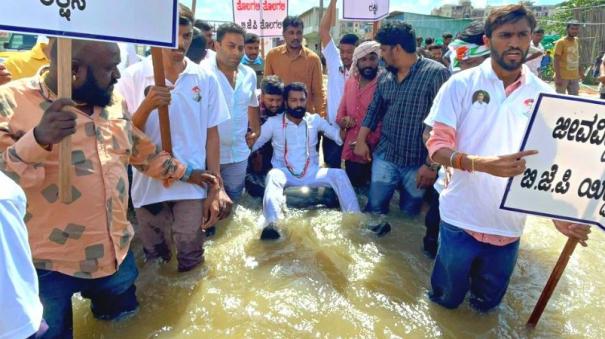 Bengaluru: With various parts of Bengaluru inundated due to heavy rains, Karnataka Youth Congress Committee President Mohammed Haris Nalabhat protested by floating a rubber tube on the flooded road to condemn the incompetence of the ruling BJP government.

In a video released about the protest, Nalabak is seen sitting on a rubber tube and struggling to balance himself, while Youth Congress workers drag him forward with banners in hand. They are chanting for the situation to be restored soon.

Mohammed Harris Nalabat posted on his twitter about the flood effects of the city, “Bengaluru city is floating in flood today due to BJP’s 40 percent commission. Protests of various kinds took place in Bellandur, condemning the state government for its careless handling of the flood crisis.

The people of Bengaluru are waiting to see when the BJP will make the city a world-class city and provide facilities to the rain-affected city. Does the BJP have an answer for them?” He questioned that.