Bermuda Duffy is the World Triathlon Champion in Abu Dhabi 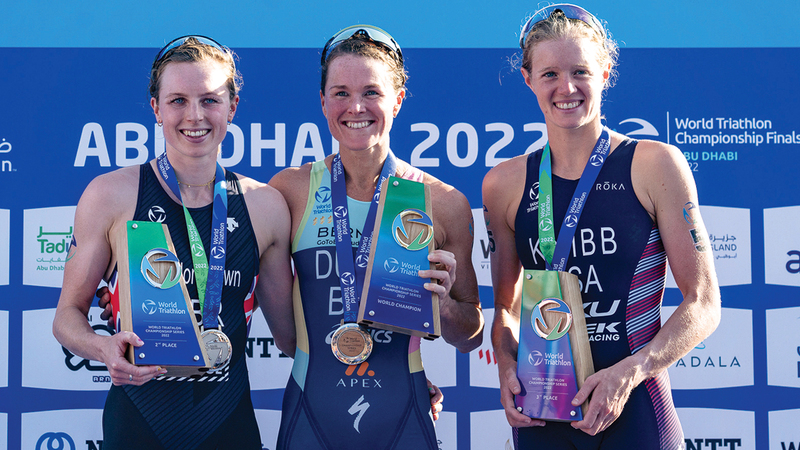 Bermudian Flora Duffy won the title (elite women) at the World Triathlon Abu Dhabi 2022, which is being held under the auspices of Daman on Yas Island, achieving a time of 01:53:24 hours, where she was able, after being late in the swimming stage by 10 places, to reach third place with The end of the cycling race, Davi quickly took the lead before the end of the first lap of the running stage. The British world number one, Georgia Taylor Brown, came in second place, 1.04 minutes behind Duffy, and the German Lena Meissen came in third, achieving 01:55:59 hours, while the American Taylor Knipp, who holds the title of the same tournament 2021, came in fourth place, achieving A time of 01:56:40 hours, and the race included swimming for a distance of 1.5 km, cycling for a distance of 40 km, and running for a distance of 10 km to the finish line, with the participation of 126 athletes.

Today’s competitions also included the World Championship race for men and women under 23 years old, where 101 athletes participated, with (62) men and (39) women in the race. Kate Wu in the women’s race, and the first achieved a record time of 01:50:15 hours, just 0.9 seconds ahead of Hungarian Gergely Case, while Britain’s Hamish Riley came in third, 0.14 seconds behind, while Wu succeeded in clinching the championship title. World Triathlon for women under 23 years, achieving a time of 2:00:18 hours, German Anika Koch came in second place, 25 seconds behind Kate, and Italian Bianca Serigny came in third place, achieving 2:01:14 hours.

In terms of children’s triathlons and junior races, a large number of children between the ages of 9 and 15 years of both sexes participated in the community race designated for them at the end of the second day’s competitions. The races witnessed strong competition between children who were divided into two categories: (9-11). For children’s races, and (12-15) for junior races.

The finals include the participation of more than 80 international federations in the prestigious event and strong competitions over three days full of enthusiasm, in several different categories, and the elite race for men begins at three o’clock in the afternoon. It is noteworthy that the world championship organized by the Abu Dhabi Sports Council, in cooperation with the International Federation of Triathlon, contributes to strengthening Abu Dhabi’s position as a prestigious global destination for major sporting events, in addition to Abu Dhabi’s geographical and strategic location, and it is eight hours or less away by plane from two-thirds of the world’s population, making it An ideal choice for hosting athletes, media professionals, sports federations and fans from all over the world.