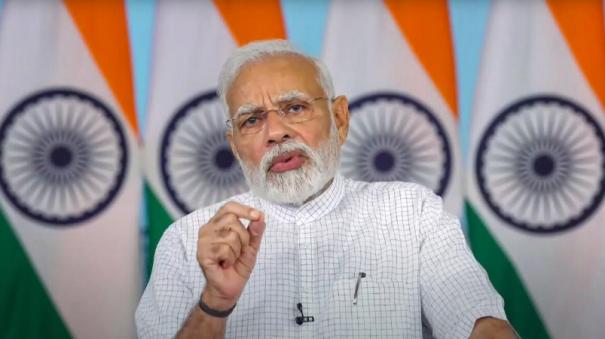 New Delhi: Chandigarh Airport will henceforth be named after Bhagat Singh. This is something that has been waiting for a very long time. Prime Minister Narendra Modi said, “Congratulations to the people of Chandigarh, Punjab, Haryana and the entire nation for this resolution.”

Speaking then, he said, “When will we get the opportunity to see the vengai is a common question that has come to most of the people. A working group has been formed to prepare the vengai. According to the environment here, this working group will monitor how these vengai are adapting themselves. Based on this, a decision will be taken after a few months. Then you can see the bananas.

For this purpose, a competition has been organized on mygov platform. What should be the name of this movement related to vengais? Suggestions can be given on naming these vangas. It would be nice if these names were also traditional; Because anything related to our society, our culture-tradition-heritage, we naturally gravitate towards them. Make sure you participate in this contest and you might even get to see the first chance to see vangai as your winning prize, who knows?

A special day is coming up on the 28th of September of Amudhap Festival. It is on this day that we celebrate the birthday of Bhagat Singh, the valiant son of Mother India. Just before Bhagat Singh’s birthday, a monumental decision was taken to pay tributes to him. Chandigarh Airport will henceforth be named after Bhagat Singh. This is something that has been awaited for a very long time. I congratulate the people of Chandigarh, Punjab, Haryana and all over the country for this decision.

Martyrs’ memorials, places named after them, organizations named after them, inspire us about our duties. Just a few days ago, the nation also made a similar attempt by installing a statue of Netaji Subhash Chandra Bose at Kartavya Path; A further step forward was put in the same direction even now when the Chandigarh airport was named after Bhagat Singh.

Due to India’s long coastline of more than 7500 km, our connection with the sea has been seamless. We are facing many challenges related to the environment of these coastal areas. While ecological change is becoming a major threat to marine ecosystems, so is widespread pollution along our coasts. It is our duty to make serious and permanent efforts to address these challenges,” he said.