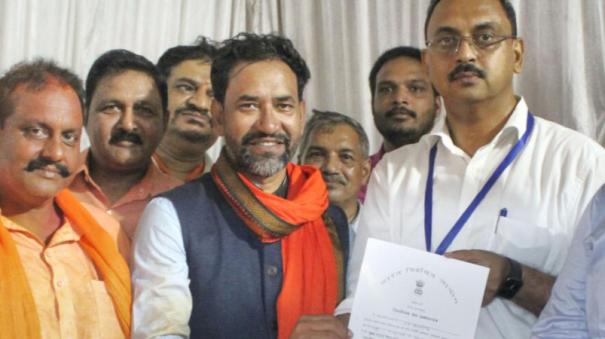 New Delhi: Bhojpuri speakers are predominant in the eastern part of Uttar Pradesh and in the state of Bihar. Thus, Bhojpuri language films have been released and become popular in UP and Bihar for the last 20 years.

Actor Niravwa has won the Azamgarh constituency where former UP chief and Samajwadi Party leader Akhilesh Singh Yadav resigned. This is a constituency with more than fifty percent Muslims and a significant number of Yatas. Azamgarh had resigned from the constituency as Akhilesh became an MLA in the last assembly elections.

In the by-elections, Akhilesh’s half-brother Dharmender Yadav contested on behalf of the Samajwadi Party. Niravva won by a margin of 8,679 votes.

Niravwa, who also opposed Akhilesh Singh in the last 2019 Lok Sabha elections, lost by a margin of 2 lakh 60 thousand votes. However, Niravva stayed in Assam and did charity work for the BJP.

Similarly, Smriti Rani, who defeated Rahul Gandhi in 2019, remained in Amethi after the defeat in 2014 and volunteered.

Born and raised in Kolkata, Niravva began to grow up to be a ‘superstar’ of Bhojpuri language films.

The scene where actress Amarpali kisses him is very popular in a movie of Niravva which was released in 2017 last. This was followed by kissing scenes in several of Niravva’s films. Bhojpuri has also sung songs in his own voice. He also sang his Bhojpuri songs in campaigns and won the election.

Before Akhilesh here, his father and Samajwadi Party founder Mulayam Singh was an MP. Considered the stronghold of the Samajwadi Party, Azamgarh has been sidelined by the BJP. Similarly, it is noteworthy that Bhojpuri actors do not belong to any party other than the BJP.