Bielefeld relegated and Stuttgart stays.. Herta is in the playoffs 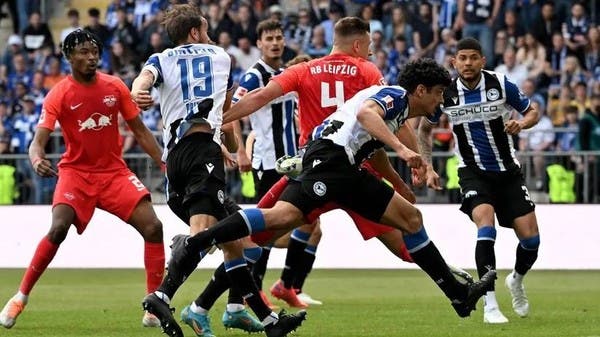 The curtain came down on the current season of the German Football League, with the relegation of Armenia Bielefeld to the second tier, Hertha Berlin’s promotion and relegation playoffs, and Stuttgart surviving in the last round of the Bundesliga on Saturday.

Bielefeld joined Grouther Fürth in the relegation trip to the second division after drawing 1-1 with its guest Leipzig, while Hertha Berlin finished the season in third place from the bottom by losing to its host Borussia Dortmund 1-2, while Stuttgart survived with an exciting scenario by winning the deadly victory over its guest Cologne. 2 – 1.

Fort is bottom of the standings with 19 points, and Bielefeld is in the penultimate position with 28 points, and Hertha Berlin is in 16th place, where it will meet in the promotion and relegation supplement with the third-placed in the second division, and Stuttgart came in 15th place with 33 points, superior to Hertha in goal difference. Berlin.

Despite the draw, Leipzig qualified for the Champions League, taking advantage of Freiburg’s 1-2 loss at Bayer Leverkusen. The identity of the participants in the Champions League was determined, and they are Bayern Munich, the champion, Borussia Dortmund, the runner-up, Leverkusen, third, and Leipzig, fourth, with the participation of Union Berlin, the holder Fifth place in the European League and Freiburg sixth place in the European Conference League.

Bayern ended its campaign this season with a 2-2 draw with its host Wolfsburg, and Mainz drew with its guest Eintracht Frankfurt 2-2, while Borussia Moenchengladbach swept its guest Hoffenheim 5-1 and Union Berlin beat its guest Bochum 3-2 and Augsburg over Grouter Fut 2 – 1.

At Chocó Arena, Jani Serra scored for Bielefeld in the 70th minute, but Willy Urban snatched the equalizer for Leipzig in stoppage time. At the Mercedes-Benz Arena, Sasa Kaladzic scored a goal for Stuttgart in the 12th minute, then Anthony Modest equalized for Cologne in the 59th minute, and Wataru Endo kidnapped the goal to stay for Stuttgart in overtime for the match.

Hoffenheim took the lead through Andrei Kramaric in the third minute, but Lars Stindel equalized for Gladbach in the 26th minute, then Al Hassan Plea added the second goal from a penalty kick in the 44th minute, and Jonas Hoffmann scored the third and fifth goals in the 45th and 68th minutes, and Brielle Embolo scored the fourth goal in the 53rd minute. The win raised Gladbach’s tally to 45 points in tenth place, one point behind Hoffenheim, who is in ninth place.

At the Ander Alten Försterei stadium, Union Berlin beat its guest Bochum with three goals to two. Union Berlin advanced with two goals, signed by Grescha Bormel and Taiwo Onyi, from a penalty kick in the fifth and 25th minutes. Bochum equalized with two goals by Simon Zoller and Edward Lewin in the 55th and 79th minutes, but Taiwo Onyi snatched the winning goal for Union two minutes before the end.

At the Bay Arena, Lucas Alario advanced with a goal for Leverkusen in the 54th minute, then Yannick Haberer equalized for Freiburg in the 88th minute, but Ezequiel Palacios snatched the winning goal for Leverkusen in overtime for the match. At the Volkswagen Arena, Bayern advanced with two goals through Josip Stanicic and Robert Lewandowski in the 17th and 40th minutes, but Wolfsburg responded with two goals signed by Jonas Wind and Max Cruz in the 45th and 58th minutes.