Big blow to Akhilesh Yadav before UP elections, badly backward in this matter 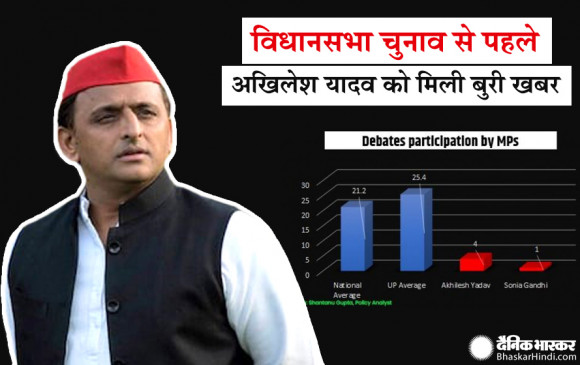 New Delhi, June 15 (IANS). Former Chief Minister Akhilesh Yadav is trying hard for the Uttar Pradesh assembly elections. He has already cleared his agenda that he has no objection in contesting elections in alliance with smaller parties. The only attempt is to overthrow the Yogi government of UP and return to power by riding a bicycle. But before this, Akhilesh Yadav has got a crushing defeat in one case.

With 36 per cent attendance in Parliament and zero questions, Akhilesh Yadav is the worst-performing MP from Uttar Pradesh, according to Bharatiya Janata Party (BJP) sympathizer and policy analyst Shantanu Gupta.

According to research compiled by author and policy analyst Shantanu Gupta, the average attendance of MPs in Uttar Pradesh is 88 percent, which is six percent higher than the national average of 82 percent in the same period.

According to the compiled research, Akhilesh Yadav’s performance in Parliament has been very disappointing in all four matters related to attendance, questions asked, debate and private member bill. He is neither visible at the grassroots level in Uttar Pradesh, nor is he present in Parliament.

In contrast, during the second wave of Kovid, Yogi Adityanath was visible at the ground level (ground zero) soon after he became corona negative. Yogi monitored many districts during 2 weeks. During his tour, Yogi also visited Akhilesh Yadav’s home town Saifai (Etawah) and Akhilesh’s Lok Sabha constituency Azamgarh. Gupta said it was during this period that Akhilesh locked himself in his palatial house in Lucknow and confined himself to tweeting only.

Sonia Gandhi has the second worst attendance record among MPs from Uttar Pradesh with 44 per cent attendance in Parliament during this period.

According to Gupta’s research, it is commendable that 4 Bharatiya Janata Party (BJP) MPs from Uttar Pradesh – Bholanath, Jagdambika Pal, Pradeep Kumar and Rajveer Diler – had 100 per cent attendance in Parliament during this period.

It is also worth noting that two six-time MPs Pankaj Choudhary and Brij Bhushan Sharan Singh, both from the BJP have 95 per cent and 98 per cent attendance respectively.

MPs have a special tool in the form of questions, through which they can ask questions to the government. Through this they can draw the attention of the government to their constituency, their surrounding area, their state or any other national problem.

As per the research, MPs from Uttar Pradesh asked an average of 44 questions as compared to 66 as the national average. Akhilesh Yadav and Sonia Gandhi did not ask any question to the government during this period.

On the other hand, 19 MPs from BJP and one MP from BSP have asked more questions than the national average of 66 questions.

It is noteworthy that BJP’s Pushpendra Singh Chandel participated in 510 debates and BSP’s Malook Nagar participated in 139 debates, which is much higher than the national average.

It is noteworthy that BJP’s Pushpendra Singh Chandel, Ajay Mishra Teni and Ravindra Shyamnarayan introduced four private member bills each in this period, which is well above the national average.